The company reported that Europium was recognised throughout the carbonatite intrusion at several times greater concentration than average for rocks elsewhere and many times that normally expected in carbonatites.

EPM said that extensive faulting and fracturing associated with the intruding carbonatite are considered to have mobilised highly mineralised fluids extending into the surrounding rocks which have implications for further REE enrichment during alteration processes.

The company had recently collected historic surface samples at Gronnedal-lka within its MEL2007/45 licence located in south-western Greenland. Samples were collected from both the older syenites and the carbonatites along with late-stage veins and shear zones.

The company said that the carbonatite complex contained a series of north-east, south-west trending late-stage dykes. These are potentially major sources of REE. High grade mineralisation is also associated with different geological lithologies which include the carbonatite, brecciated gneiss, calcite veins and magnetite rich zones.

The magnetic zone identified by the Company’s re-interpretation work has a strike over 4km with a width in excess of one kilometre. Generally, assay results greater than 4,000 ppm TREE are associated with carbonatites within the ovoid shaped magnetic responses or lie on the contact edges of the carbonatite.

The company said that the work also confirmed the whole intrusion contains europium with a peak value of 423 ppm Eu in Sample G11009. Based on the assay results for europium (Eu), the values occurring at Gronnedal-lka are several times greater than the average for rocks elsewhere in the Gardar Province. 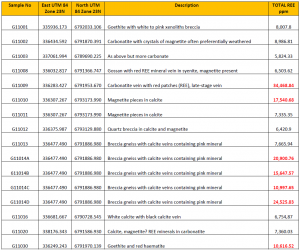 The Gronnedal lka carbonatite contains the only known accessible source of carbonate rock in Greenland which could be suitable for neutralising acid mine and process water.

The company said that further work will concentrate on the main geological units such as the fenites, cross cutting carbonatite veins, local variations of the magnetic content, and banding within the carbonatite units. EPN said that a systematic geochemical survey will also be conducted on a close spaced grid for the purpose of defining targets for future drilling.

The company said that radiometric data showed anomalous responses over the carbonatites, and additional, higher resolution surveys are planned to be conducted over the project tenement.

These REE results show high europium values amongst other REE, which are in extremely short supply around the world. Many of these samples were collected from the carbonatite in Gronnedal, but the highly altered surrounding rocks also offer excellent mineralisation potential. The results show persistent content of REE.

Gronnedal-lka is known to have the only known carbonatite deposit proximal to existing port facilities within Greenland. The carbonate body of 2km by 1km could provide an ideal lime and limestone product for neutralising acid mine and process wastewater produced by other miners in the Greenlandic region.

Overall, the results confirm there is excellent REE potential at the surface in Gronnedal-lka. The REE prospectivity fits well with our mission to excel in the commercialisation of metals and minerals demanded in the production of green energy and required by the industry to reduce pollutants. Historical exploration records indicate the potential for rapid development and production of cryolite, fluorite, quartz, REE, carbonate, zinc and siderite.”