The company said that the new detailed 1m results have yielded Marmota’s best ever 1m intersection of 165 g/t gold, at 66m downhole.

MEU said that the new NW flank has reported multiple high-grade assays and strike has increased three-fold in 1 year. NW flank remains open, both to the North and to the west and at depth. Marmota said that this program is the first time that it has also intersected high-grade gold at depths below 80m.

The company reported that the new detailed 1m results have yielded Marmota’s best ever 1m intersection of 165 g/t gold, at 66m downhole from Hole 20ATRC324.

Marmota said that it also collected 5 separate spearings of the drilling sample bag and then assayed each spear sample separately by fire assay, to ensure that the outstanding assay of 165g/t gold is not the result of a ‘nugget effect’.

Summary Highlights at Aurora Tank are as shown below. 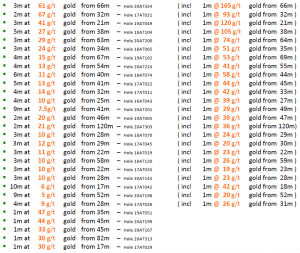 The company said that this is the fourth drilling program at Aurora Tank in which Marmota has intersected grades of ~ 100 g/t gold (or more) over 1m, and now in 4 distinct areas. The results and the different zones are as shown below.

The company said that the new NW flank has reported multiple high-grade assays. The NW flank is a new zone discovered in Marmota’s previous 2019 drilling program while following up elevated gold in biogeochemical sampling (tree sampling).

A year ago, the NW flank was known to extend approximately 95m in a NE direction. The company said that at the end of this program, the NW flank now extends about 3 times that distance (285m) in a north-easterly direction and remains open along strike.

Marmota said that this program is the first time that it has intersected high-grade gold at depths below 80m in addition to very high gold grades close to surface.

The company noted that the reconnaissance Hole 20ATRC303 designed to test for an extension to the west of the NW flank intersected 1m at 36 g/t (2m @ 21g/t) at a depth of 122m downhole, suggesting the presence of high-grade shoots to the west and at depth.

Marmota said that it is currently reviewing results received to date from this drilling campaign and considering additional work programs and additional infill and extensional drilling.

The Company said that it has been adopting a ‘work in parallel’ methodology, which allows us to advance both the exploration side and production pathway simultaneously.

In December, Marmota carried out the first ecological surveys (fauna and flora) and hydrology work (including to supply water at Aurora Tank) that are also necessary components to seeking a Mining Lease. The company said that two teams have been active in a very substantial sampling program at both Aurora Tank and surrounding tenements, in exploration work that is being jointly funded by the SA Government under a $225,000 grant awarded to Marmota under the Accelerated Discovery Initiative.

MEU said that further detail will be provided when Stage 1 is complete, and the teams have returned collected samples to Adelaide.