The company said that the new results support the interpretation of two parallel quartz-sulphide lodes in the central Mulga Bill prospect.

GBR reported that the multi-element sampling at Mulga Bill showed Copper grades in excess of 1% associated with gold in parts of the veins. The company said that the mineralised veins occur within an extensive district with highly elevated levels of Bismuth and Molybdenum, suggesting Mulga Bill is part of a large intrusion-related vein system. GBR noted that the multi-element pathfinder footprint is over 1.2km long and open along strike.

Great Boulder announced that follow-up drilling is planned for July to test extensions to high-grade zones and new targets generated by geochemical sampling. The company said that the RC drilling is continuing at Blue Poles within the Whiteheads Gold Project near Kalgoorlie.

The company had recently completed a Reverse Circulation (RC) drilling programme at the Mulga Bill prospect within the Side Well Gold Project. GBR has now reported the final assays from the drilling campaign in April.

GBR reported that further high-grade assays were reported from the remaining RC holes at the Mulga Bill prospect. The company said that the remaining results support Great Boulder’s interpretation of two sub-parallel lode positions striking north-south through the central area of Mulga Bill.

Key intersections are shown below. 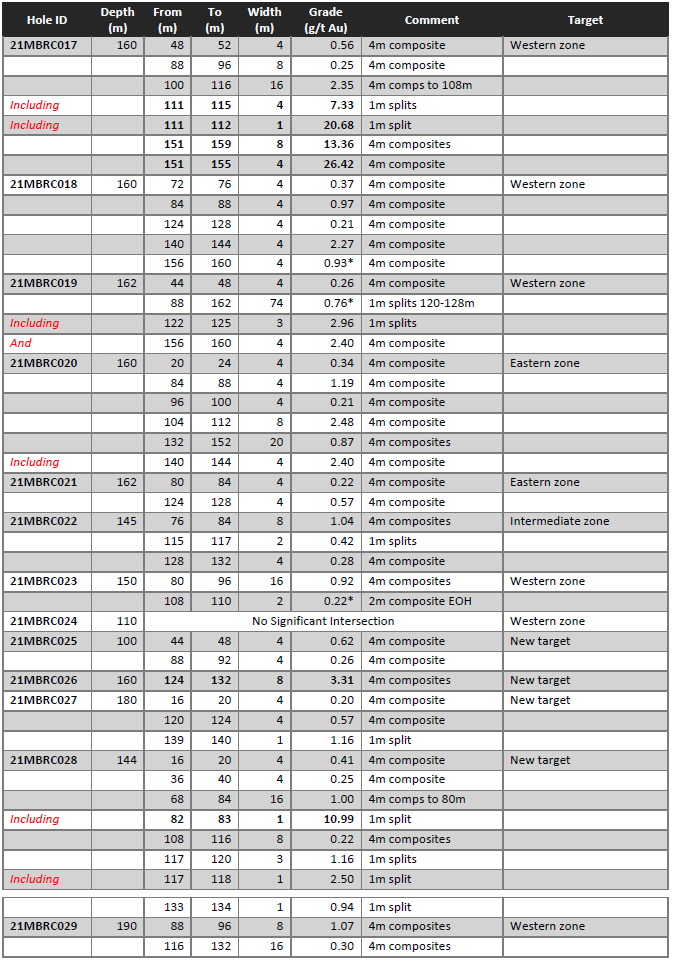 The company said that the geochemical data showed a large-scale, high-tenor pathfinder footprint indicating Mulga Bill is likely part of a significant intrusion-related vein system. This association suggests significant size potential to the deposit, both along strike and at depth.

GBR said that the pathfinder elements bismuth, copper, and molybdenum are coincident with anomalous gold values in both Great Boulder’s RC and AC drilling, an association indicative of an intrusive-related gold system.

The company noted that bismuth anomaly is particularly compelling, showing an extremely high-tenor footprint stretching more than 1.2km along the western lode structure with a peak value of 121.34ppm Bi in hole 21MBRC016.

GBR said that a number of the Company’s AC holes outside the area of current drilling have returned significant bottom-of-hole bismuth values, and the Company plans to review and identify potential drill targets from these holes as part of its forthcoming exploration program.

Great Boulder’s Managing Director, Andrew Paterson said: “I’m pleased to see this last batch of RC results supports our geological interpretation at Mulga Bill. This gives us confidence to plan further definition drilling in the next program, and we also have new zones to follow up in the northern section.

The identification of such a strong pathfinder signature at Mulga Bill is even more exciting. This is an important step forward in our understanding of the project and it indicates the potential for a very large gold system.

Dr. Scott Halley assessed the geochemical data for us. According to Scott the pathfinder association and style of hydrothermal alteration is most unusual in the Yilgarn. Although drilling to date has intersected narrow high-grade veins, the chemistry is indicative of a big magmatic-related gold system.

Bismuth forms distinct haloes around the veins and gives us immediate targets for follow-up drilling outside the current area of focus and also justifies some deeper holes into the western and eastern zones. We’d like to get some diamond holes into these areas as soon as we can”.