First Au Limited (ASX: FAU) announced that the strong assay results including 20m @ 3.7 g/t Au from 72m (containing 1m @ up to 30 g/t Au) were delivered from recent RC and diamond drilling at its Gimlet gold project near Kalgoorlie.

The company said that the drilling continues to demonstrate strong gold intersections within and below the current Gimlet mineralisation envelope.

FAU said that a potential new gold lode was identified in footwall position at Gimlet. The new gold target was identified from mineralisation study developed from the 2020 drilling.

The company said that it will proceed with a study to examine potential resource upgrade.

The company had commenced an RC drilling program at the Gimlet Gold Prospect in November 2020 and diamond drilling program in December 2020. The RC drill program consisted of 15 RC holes (20GRC005 – 20GRC019), 2160 m in total, and focused on drilling around the current Resource area as well as other exploration targets. The DD program consisted of 2 holes (20GDD004 and 20GDD005) to a total depth of 572 m.

Significant Au Intersections in Gimlet are as shown below. 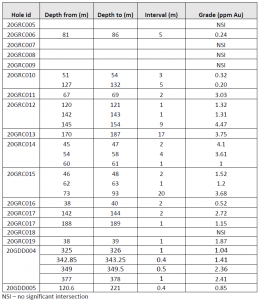 FAU said that the exploration drilling at Horan’s Dam continued to identify mineralisation in the oxide zone, with drill hole 20GRC019 having the best results of 1m @ 1.9 g/t Au (from 38m).

The company said that drillhole 20GDD004 was successful in identifying quartz-pyritearsenopyrite veining and alteration like what has been observed in the previous drilling at Gimlet. This mineralisation was dispersed over several zones within a 60m interval and suggesting the mineralisation still exists at depth. The best intersect was 10m @ 0.6 g/t Au from 376.5m, including 1m @ 2.4 g/t Au.

FAU reported that the most important outcome from the deep diamond hole and the previous 3 diamond drillholes drilled in May 2020 was the increased knowledge of litho-structure of the Gimlet mineralised system. This has been through geology, alteration, and structure logging by FAU and geological consultants “Model Earth”.

The Company reported that it will begin work on a new resource upgrade for Gimlet in the coming months, at the same time as exploration work intensifies on FAU’s Victorian gold assets. FAU had announced a maiden JORC Inferred Resource of 69,000 oz Au to the ASX, on the 7th May 2019.

The Company said that it is waiting on multi-element geochemistry, which will assist in looking at potential silver credits to the upcoming resource. FAU said that it will also plan a new RC drilling program to improve the continuity of the oxide and transitional mineralisation, as well as testing a new structural target area along strike to the Resource area.

The Chairman of FAU Bryan Frost said: “The drilling over 2020 has now set us up to potentially develop a new resource for 2021. While things are moving quickly regarding our gold project in Victoria, we still greatly value this asset and will look at further drilling on new targets and further develop our understanding of the oxide / transitional ore within the resource, to then see if it is feasible to mine in a current, high gold price environment.”