The company said that the drilling continues to focus on the recently defined Ternera eastern extensions with results confirming excellent continuity between holes both along strike and down dip.

TSO said that the drilling is ongoing, with four rigs operating 24/7. In total Tesoro has drilled 34,380m and assays for 22 holes remain outstanding.

TSO said that this included exceptional grades of up to 69.70g/t Au from an extensive high-grade gold bearing vein system, previously identified from surface mapping and sampling.

The company said that mineralisation appeared to be better developed adjacent to the contact between the Toro Gordo Granodiorite and the El Zorro Tonalite, which hosts a majority of gold mineralisation at the Ternera deposit. TSO said that further assessment of the Toro Gordo prospect is required by additional drilling and surface mapping and sampling.

The company said that the holes ZDDH00087, ZDDH00089, and ZDDH00090 were all drilled as infill holes along the north east extension of the Ternera deposit as part of the ongoing extensional and infill drilling program currently underway to define gold resources at Ternera.

The company said that hole ZDDH00089 drilled through a fault block of sedimentary rocks with minor mineralisation associated with a north-south master fault. 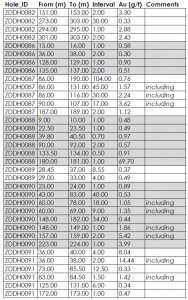 TSO said that further work will be focused on drill testing the Ternera mineralisation and additional prospects as defined in the work program. The company said that the core will be used for metallurgical testwork and resource modelling is planned.

Tesoro Managing Director, Zeff Reeves said: “El Zorro continues to deliver, with exceptional initial drill results from Toro Gordo demonstrating the large quantities of gold within the El Zorro mineralising system. To achieve drilling success with the first holes into a new target is a testament to our technical team and the diligent work they are undertaking to execute our work programs, as well as what is now becoming a proven, extensive gold system at El Zorro.

The Toro Gordo mineralisation appears to be a different style for El Zorro with gold being hosted within an extensive high-grade vein system. We’ll continue to review these results and plan additional drilling to further test the target.”