CHN said that a cluster of 29 low to moderate EM conductors was defined, similar to those that led to the Gonneville discovery. The company said that several extensive Ni-Cu+/-Pd soil anomalies were proximal to and in cases coincident with these new EM conductors.

Chalice said that the results highlight the potential for the discovery to expand considerably along strike to the north. The company said that additional ground EM surveys and soil sampling is currently underway at the Baudin and Jansz airborne EM targets.

CHN said that it is fully funded to continue its reconnaissance program along the ~26km long Julimar complex, in parallel with the ongoing 7-rig resource drill-out and early-stage mining studies at Gonneville.

The company said that the survey over Hartog defined a cluster of 29 low to moderate conductance, mid to late-time bedrock EM conductors interpreted to be potentially significant Ni-Cu-PGE targets, of similar aerial extent and range of conductance to those at the Gonneville discovery immediately to the south.

The preliminary modelled MLEM conductors at Hartog are as shown below. 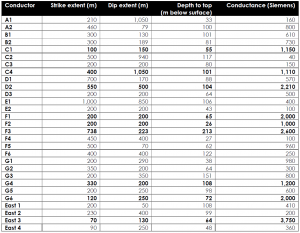 CHN said that most of the MLEM conductors (A1-G6) occured within a ~6.5km long, 1-2km wide corridor that extends directly north from Gonneville, although four conductors (Hartog East 1-4) are located to the north and north-east of the main corridor and appeared to define a new trend.

The company said that the surface soil sampling was completed at Hartog target as a first-pass screening technique to assess and prioritise MLEM conductors.

CHN reported that the soil sampling at Hartog outlined extensive areas of moderately anomalous nickel, copper, and/or palladium, both coincident with and proximal to the new MLEM conductors and similar to the results generated over Gonneville prior to its discovery.

Chalice noted that a strong and coherent chrome anomaly (>700ppm Cr) was also identified central to the Ni, Cu, and Pd soil anomalies, and is interpreted to indicate that prospective ultramafic (pyroxenite) geology extends north from Gonneville through Hartog.

The company said that the results highlight the potential for the discovery to expand considerably along strike to the north.

CHN said that based on the results of the initial MLEM survey, additional surveying is underway to expand and infill geophysical coverage to approximately 200m spaced lines across the Hartog Target.

The company said that this program aims to define drill-ready targets and is anticipated to be completed by mid-April.

Chalice reported that the first-pass surface soil sampling is also underway to the north of Hartog, along the remainder of the ~26km long Julimar Complex, including the Baudin and Jansz AEM targets where historical rock-chip and stream sediment sampling identified Ni, Cu, and Pd anomalism.

The company said that a second approval will be sought from the relevant State Government departments to allow first-pass drill testing, anticipated to occur in Q3 2021, once drill targets are finalized.

The identification of discrete EM conductors together with extensive nickel-copper soil anomalies highlights the significant potential of this area to deliver further growth at Julimar directly along strike to the north of where we have a major resource drill-out underway.

Soil sampling and ground EM at Gonneville guided us to the initial discovery and we are very encouraged to see similar early results at Hartog. We are also pleased that our first regional field exploration program has validated the results generated by the airborne EM survey flown last year, which is a positive sign for our ongoing exploration of the broader district.

Meanwhile, we have stepped up drilling activities again at Gonneville, with seven rigs now drilling prioritising definition and expansion of high-grade mineralised zones. Initial resource and pit-shell modelling is also being undertaken concurrently, which is guiding our drill pattern.”