De Grey Mining Limited (ASX: DEG) announced that drilling has confirmed a large gold mineralised system at the Diucon and Eagle areas within the Hemi gold discovery in Western Australia. DEG said that Diucon and Eagle continue to demonstrate the potential to rapidly and cost effectively add to the gold endowment at Hemi.

The company said that the Hemi mineralisation now extends approximately 3.5km east-west from Brolga to Eagle. All zones at Hemi remain open.

Drilling at Diucon and Eagle

Diucon and Eagle are located immediately to the west of Crow and present a potential geological link between the Crow intrusion to Antwerp. The gold mineralisation at Diucon and Eagle shows similar alteration and sulphide development as seen at the adjacent deposits of Aquila, Brolga, Crow, and Falcon.

At Diucon, a combination of definition drilling and extensional drilling was recently conducted at an 80m line spacing on section 28800E. Drilling was also done at Eagle on section 28240E. The company has now reported high-grade drill results from Diucon and Eagle.

The company reported that broad zones of gold mineralisation were identified in 160m line spacing and 80m hole spacing at Diucon. DEG said that drilling continues to the west and at depth.

The company said that mineralisation remains open to the west and may plunge below sediments intersected in previous aircore drilling on section 28720E. DEG said that extensions will be tested with further RC and diamond drilling.

The company reported that drilling on section 28240E at Eagle intersected 61m @ 2.6g/t Au from 116m in HERC480. DEG said that the mineralisation in HERC480 is located approximately 80m beneath shallow high-grade mineralisation comprising 36m @ 6.9g/t Au from only 40m downhole in HERC470.

The company said that the geological interpretation of the magnetic data and aircore drilling suggests the Eagle intrusion may also extend to the north, providing added potential.

Mineralisation at Eagle currently extends for approximately 600m along strike and remains open to the north, west, and at depth.

Significant new results (>2 gram x m Au) from Diucon and Eagle are as shown below. 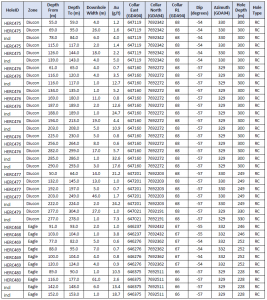 De Grey Managing Director Glenn Jardine said: “These recent results at Diucon and Eagle confirm the presence of a large mineralised system in the west of Hemi. Both zones remain open to the west toward Antwerp. Diucon and Eagle represent another step change to the gold endowment at Hemi.

Extensional RC drilling is currently being conducted on 160m spaced sections and 80m spaced collars on section. This drilling has demonstrated 900m and 600m strike lengths respectively at Diucon and Eagle with significant grades and widths downhole. Mineralisation remains open along strike and at depth with multiple stacked lodes in places. RC drilling is also being conducted in places at 80m line spacing to confirm continuity of mineralisation.

RC drilling to determine the overall scale along strike continues and diamond drilling of potential down dip extensions is expected to commence during the quarter.”