Perseus Mining Limited (ASX/TSX: PRU) announced that the results from the recent exploration activities at its Bagoé and Yaouré properties in Côte d’Ivoire have demonstrated the potential for the Company to organically grow its gold inventory through further drilling success.

The company reported encouraging results at Govisou, 3km from Perseus’s Yaouré Gold Mine, with wide intercepts of shallow gold mineralisation including 93m @ 2.74 g/t Au from 0m and 24m @ 1.18 g/t Au from 98m.

PRU said that the drilling at Bagoé permit confirmed gold mineralisation at the Antoinette, Véronique, and Juliette prospects, with recent drill results including 12m @ 3.49 g/t Au from 0m and 17m @ 6.45 g/t Au from 32m.

Perseus said that it is on track to deliver on its plan of producing more than 500,000oz gold pa from FY2022.

PRU had recently commenced exploration activities at its Bagoé and Yaouré properties in Côte d’Ivoire.

At Yaouré, the recent exploration focused on the drilling of satellite prospects within five kilometres of the Yaouré mill with the potential to deliver shallow oxide ore during the early stages of the project – the Angovia 2 and Govisou prospects, both within 5km of the Yaouré mill.

The company also reported progress on the definition of drill targets from the 3D seismic survey completed in 2020, recently supplemented by the completion of an airborne gravity (FTGG) survey.

PRU said that the recent results from the company’s exploration programmes in Côte d’Ivoire, demonstrate potential for organic growth of gold inventories across its multi-mine asset portfolio. 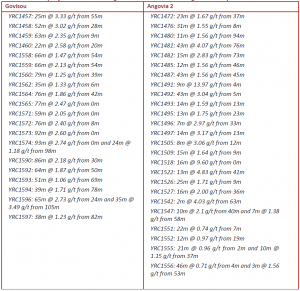 PRU said that early indications suggest Govisou hosts a ‘pencil- shaped’ plunging structure that remains open at depth. The company said that follow-up drilling is planned to improve understanding of the Govisou mineralization.

Perseus said that the drilling at Bagoé permit, 70km from Perseus’s Sissingué Gold Mine, confirmed gold mineralisation at the Antoinette, Véronique, and Juliette prospects.

The intercepts from Bagoé Exploration Permit – Véronique, Juliette, and Antoinette Deposits are as shown below. 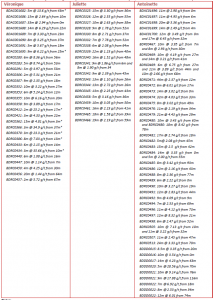 PRU reported that the drill results from the Bagoé prospects will form the basis for a Definitive Feasibility Study (DFS) on a mining and trucking operation that will result in ore being transported to Sissingué for processing. The DFS is due to be completed in the June 2021 quarter.

Perseus said that the ongoing exploration programmes at Yaouré will focus on follow up drilling at Govisou to elucidate the lithostructural controls on the mineralisation and to follow potential down plunge extensions to the high-grade pod defined in the latest drilling, and the commencement of drill testing of targets generated from the 3D seismic survey conducted in early 2020, with an initial focus on near-surface targets.

The company said that it intends to use the results of drilling conducted during the December 2020 quarter to update the estimates of resources at Véronique and Antoinette deposits and produce a maiden resource estimate for the Juliette deposit.

Perseus said that it also intends to pursue other occurrences of gold mineralization within the Bagoé Gold Project that were located by exploration by previous operators.

Perseus said that it is on track to deliver on its plan of producing more than 500,000oz gold pa from FY2022, with each of its Edikan, Sissingue, and Yaoure gold mines in production and producing to plan.

Perseus’s Managing Director and Chief Executive Officer Jeff Quartermaine said: “For the last five years or so, Perseus has been very focussed on funding the development of new mines. In that time, we have spent nearly US$400 million developing two new mines, one at Sissingué and the other at Yaouré in Côte d’Ivoire. This has left little capital available to invest in the organic growth of our Company. With the completion of construction and the pouring of first gold at Yaouré in December 2020, we are now able to adequately fund exploration programmes aimed at extending the lives of all our existing mines and organically growing our Company.

The results published today illustrate the significant potential for the delineation of further Mineral Resources and Ore reserves in the vicinity of existing infrastructure at each of our mines. Our Yaouré tenements are showing excellent potential for further discoveries and the drilling results achieved at Bagoé demonstrate why Perseus acquired Exore Resources Limited last year and promise to provide mill feed to materially extend the life of our Sissingué operation.”