New World Resources Limited (ASX: NWC) has announced new thick, high-grade assay results from four recently completed drill-holes at the Antler Copper Project in Arizona, USA, including one of the best intersections returned from the Project to date.

The company said that a new zone of thick, high-grade mineralisation was also discovered at the northern end of the “Main Shoot”.

New World said that assays are pending for 13 additional completed drill holes, with these results expected over the coming weeks. The company said that two rigs continue drilling at the Antler Project, with 7 RC pre-collars yet to be completed with diamond core tails.

New World has reported new thick, high-grade results, including from one of the deepest holes yet drilled at the Antler project.

New World said that the recent drilling has confirmed an extension of the thick high-grade mineralisation at the northern end of the Antler Deposit.

The company said that this mineralisation is located immediately along strike from an area of mineralisation that was drilled in detail from underground (but remains unmined) in 1969 and 1970. NWC said that these intersections provide further evidence that there is considerable potential to discover additional mineralisation at the Antler Project.

The company also reported assay results for drill holes ANTDD202138 and ANTDD202139. NWC said that both holes intersected multiple intervals of high-grade mineralisation, albeit these intervals are thinner than those in many surrounding holes.

New World said that the results from these drill holes continue to help the company understand the variability of mineralisation at the Antler Project, and, importantly, help define where thicker extensions of high-grade mineralisation are likely to be present.

Significant intercepts in drill holes ANTDD202032, ANTDD202138, ANTDD202139, and ANTDD202144 completed recently at the Antler Copper Project are as shown below. 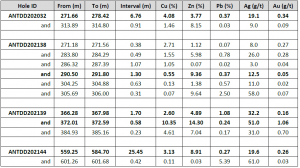 The company said that seven RC pre-collars which have been drilled in advance of completion, through target zones, with diamond core drilling. NWC said that the completion of these holes is being prioritised, in conjunction with drilling new diamond core holes from surface to test new targets arising from the ongoing drilling and other exploration activities.

We are also continuing to discover additional thick, high-grade mineralisation with exploratory drilling along strike from the Main Shoot, which continues to expand and add confidence to the resource base.

With drilling consistently delivering substantial thicknesses of very high-grade mineralisation at Antler, the project is continuing to emerge as one of the highest-grade undeveloped copper deposits globally and a very real near-term development proposition.”