Catalyst Metals Limited (ASX: CYL) announced that high-grade gold mineralisation and visible gold including 1.35 metres @ 117.0g/t Au were intersected in four of the nine holes of the exploration diamond drilling at Boyd’s Dam – Boyd North at the Four Eagles Gold Project in Victoria.

The company also reported visible gold in deep structure in two diamond drill holes at Boyd North, which are not yet assayed. CYL said that RC, Diamond, and Air Core drilling are ongoing on three projects.

The Four Eagles Gold Project is situated along the Whitelaw Gold Corridor which is considered to be a major structural control of gold mineralisation north of Bendigo.

Catalyst holds a 50% interest in the Four Eagles Gold Project with the other 50% held by Gold Exploration Victoria Pty Ltd. Exploration is jointly funded by Catalyst and GEV.

Significant prospects which have produced high-grade gold mineralisation include Hayanmi, Boyd’s Dam, and Pickles. Other important prospects include Cunneens to the south-west and Eagle 5 to the east.

The company had commenced diamond drilling program at Boyd’s Dam in December 2020. CYL said that it has completed nine holes for a total of 4,208 metres.

CYL said that the program was designed to test Boyd’s Dam-Boyd North structure down to a vertical depth of 400 metres.

The company announced that assays have been received for the first four diamond drill holes FEDD044 to FEDD047. The company said that no RC assays are yet available.

The company reported that high-grade gold mineralisation was intersected in DD holes FEDD044 and FEDD047 which tested Boyd’s Dam structure.

CYL reported that the most significant intersection was that recorded at 326.1 metres downhole in FEDD047 which contained visible gold and arsenopyrite in a strong quartz vein (Plate 2) and assayed 1.35 metres @ 117g/t Au with a maximum value of 435g/t Au.

Catalyst reported that this structure may be connected to a previous high-grade quartz vein in FEDD015 which assayed 2.0 metres @ 10.1g/t Au.

CYL said that further drilling will determine if this gold zone is continuous and whether it is related to other shallow zones at Boyd North.

The company said that two shallow gold zones were intersected in FEDD044 and contained four narrow intervals ranging in value from 13.8g/t Au to 45.3g/t Au. CYL said that the deeper zone contained visible gold (Plate 1). CYL noted that these are likely to relate to gold zones intersected by previous RC and air core drilling at Boyd’s Dam.

The summary drill assay results from the 4 DD holes are as shown below. 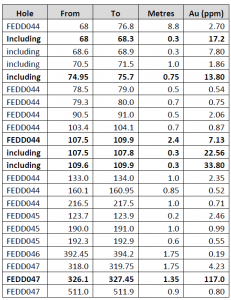 Catalyst said that another significant result was the intersection of a strong structure at depth in two diamond drill holes (FEDD049, FEDD052) below Boyd North which contained quartz veining with arsenopyrite and visible gold (Plates 3 and 4).

CYL said that although assays were not completed, these intersections support the concept of vertical stacking of ore zones along the anticlinal axis at Boyd’s Dam- Boyd North.

The company said that Air core and diamond drilling is in progress at the Tandarra Gold Project and a regional air core drilling program is being undertaken at the Drummartin Project north of Fosterville.

CYL said that at Boyd’s Dam, intensive diamond drilling and trial deep RC drilling will be completed in the 2021 field season.

Technical Director of Catalyst Metals Bruce Kay said: “It is very encouraging to intersect quartz structures with visible gold in four of the nine diamond drill holes completed so far this year, especially considering the wide spaced nature of the drilling. The discovery of a new deep structure beneath Boyd North adds to the potential of the whole mineralised system”.