Viking hits visible gold below mine workings at First Hit

Reviews are planned for the remaining 4 holes (VDD016 to VDD019), along with all other holes drilled at the project following the visible gold sighting.

Drill hole status for the final 6 holes of phase 1 & phase 2 diamond drilling are displayed below: 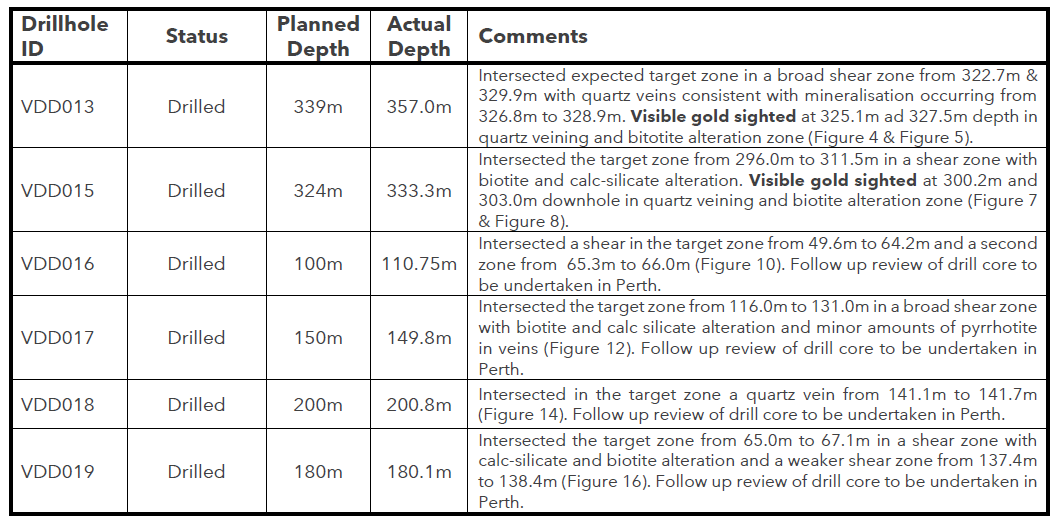 The First Hit Project is situated in the area surrounding the historic high-grade First Hit gold mine, located along the prospective Ida and Zuleika shear zones in the Eastern Goldfields of Western Australia.

The Project incorporates ~28km² of tenements with six active mining and prospecting licences and one exploration licence under application.

Prior to the closure of the First Hit gold mine by Barra Resources in 2002, the mine had produced ~30koz of gold at an average grade of ~7.7g/t Au. No modern exploration had been conducted at the project for the 18 years prior to Viking’s recent exploration activity.

Post-drilling, Viking reports that it will work on a 3D model of the First Hit mineralisation to be used to undertake further targeting and plan follow up drilling.

The company reports that 3D modelling of the regional geology and structure at the tenement has commenced with a site visit completed by Model Earlth, and a review of data underway.

Viking Mines Managing Director & CEO Julian Woodcock said: “I am excited to be able to report that we have now shipped all of our core to Perth and commenced a follow up review of key intersections from the drilling completed on First Hit.

So far, 2 of the 6 holes reported in this release have been reviewed and visible gold has been sighted in multiple zones in both holes. These holes form part of the depth extension drilling and provide positive encouragement for the continuation of mineralisation at depth for First Hit.”