Tietto Minerals Limited (ASX: TIE) announced that high‐grade gold results including 1m @ 46.57 g/t Au from surface were reported from a number of targets identified as part of a regional and stepout drilling program outside its Abujar Gold Project in Côte d’Ivoire, West Africa, demonstrating the potential for continued resource growth.

Tietto said that Abujar PFS and maiden reserve delivery is expected by end of Q1 2021.

The company had recently commenced a regional and stepout drilling program outside its 3.02‐million‐ounce Abujar Gold Project (AGP) in Côte d’Ivoire, West Africa.

This regional and step‐out drilling is a part of Tietto’s systematic 70,000m drill program designed to grow resources at the Abujar Gold Project by testing the latest high priority targets.

TIE has now reported encouraging results from these seven prospects.

The company reported strong intercepts across multiple targets outside its Abujar project. Significant intersections from all the targets are as shown below. 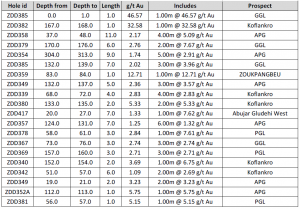 The company reported encouraging results at Koflankro with 1m @ 32.58 g/t Au from 167m beneath gold in soil anomalism. TIE noted that gold mineralisation was intersected in drilling at Koflankro over a 600m strike along multiple parallel contacts and over 1,900m of strike still remains to be tested.

The company reported that the drilling at APG intercepted good widths and grade with 11m @ 2.17 g/t Au from 37.0m incl. 4m @ 5.09 g/t Au and this has confirmed mineralisation over an additional 400m strike length outside of the current resource model.

TIE reported that the drilling intercepted a potential new lode at Abujar Gludehi West (“AG West”, immediate west of the AG deposit), with ZDD417 returning 7m @ 1.33 g/t Au from 20.0m including 1m @ 7.62 g/t Au from beneath a quartz vein mapped on surface.

Tietto said that it has collected 3,089 soil samples over a 200m by 25m grid to test and/or sterilise prospective structures associated with potential infrastructure locations.

TIE said that it is currently undertaking contract aircore drilling and its own diamond drill rigs will follow up and test these high‐priority targets.

The Company announced that it remains well positioned to advance its dual strategy in 2021 – aggressively exploring at Abujar to drive rapid resource growth; and fast tracking development of the Abujar Gold Project.

The company said that a feasibility study is underway and the PFS due for release in Q1 2021 and the DFS expected in Q3 2021.

TIE said that it has a clear pathway to development, with mining licence granted and ESIA approved. The company said that COO started 1 February 2021 and it is positioned to deliver on project milestones with more than A$57M in cash.

Tietto Managing Director, Caigen Wang, said: “Our regional and step‐out drilling, aimed to further grow our 3.02Moz Abujar Gold Project, and has returned results that continue to underline our belief that we’ve only scratched the surface of this large gold system.

We continue to hit gold mineralisation in new areas where we are drilling for the first time and these high‐grade gold results from regional and step‐out drilling programs provided us with great encouragement.

We will continue to report our results from these drill programs as we work towards a maiden reserve announcement and completion of a Pre‐Feasibility Study for Abujar later this quarter.

With 6 Tietto‐owned diamond drill rigs running day and night for up to 3,000m of drill core per week, we are very pleased to be able to drill for both resource growth and category upgrades simultaneously.”