In March 2021, the company delivered an updated JORC 2012 Indicated and Inferred Mineral Resource Estimate for the Jaguar Project totalling 58.9Mt at 0.96% Ni for 562,600 tonnes of contained nickel. Importantly, more than 80% of the contained nickel was located within 200m of surface, with positive implications for future open pit mining. 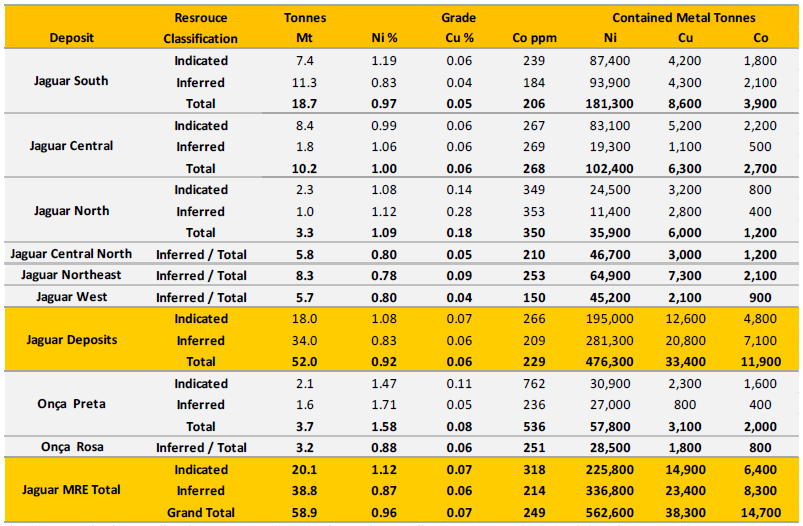 Jaguar South is currently the largest deposit at the Jaguar Project, followed by Jaguar Central.

Centaurus Managing Director Darren Gordon said: “It’s pretty remarkable to be able to report our best intercept to date – a stunning 56.1m at 2.05% Ni including 17.6m at 4.86% Ni – even after drilling over 300 holes into the Project and delivering a globally significant resource of more than 560,000 tonnes of contained nickel. The key message for investors is that this is a project that is continuing to grow – and grow quickly, both from resource development drilling and step-out and regional exploration.

The new record intercept at Jaguar South has to be one of the best nickel sulphide hits in the world this year and to have this sort of intersection immediately below our planned pit limits indicates how much upside remains in the Project.

Within the next couple of weeks, we will have eight rigs on site and this expanded capacity will allow us to work on resource growth and greenfields drilling in conjunction with the development drilling. This multi-pronged approach sets us up for what should be a big second half of project growth at Jaguar.

The fact that Jaguar stands to grow a lot more can only further enhance its credentials as a potential source of clean, low-emission nickel sulphides to meet surging global demand as the world moves rapidly to embrace electrification and decarbonisation.”