Silver Mines Limited (ASX: SVL) has announced a substantial expansion of drilling activity at the Bowdens Silver Project located near Mudgee in New South Wales, with the commencement of a 30,000 metre program with four rigs operational on site.

SVL reported that the Northern Feeder Vein is interpreted over a strike of at least 120 metres and to a depth of 260 metres (150 metres below the proposed Bowdens open pit) with silver grade consistently over 1,000 grams per tonne (or over 30 ounces silver per tonne).

SVL said that the drilling will continue at the recently defined high-grade Aegean Zone, along with the Northwest High-Grade Zone, to expand the potential for underground mining scenarios. The company said that the expanded drilling program would continue until at least the end of 2021.

SVL had recently completed highly successful drilling at the Bowdens project, which resulted in the identification of new silver feeder veins.

This, in turn, led to the decision to substantially expand drilling activity at Bowdens Silver. The company said that a 30,000 metre program has commenced with four rigs operational on site.

The company said that the analysis of highly successful recent drilling has identified individual steep feeder veins considered to be source structures to the main Bowdens Silver mineralisation.

SVL said that the drilling has shown that steep veins and breccias at Bowdens contain the highest-grade mineralisation and extend to depth.

The company reported that a recently identified individual structure, now called the Northern Feeder Vein is currently defined with 120 metre strike east to west and to a depth of 260 metres (150 metres below the current open pit design), within the wide Main Zone. The Main Zone defines the highest-grade component of the Bowdens Silver Ore Reserve.

The intercepts determined to be the Northern Feeder Vein and proximal breccias from recent and historic drilling are as shown below. 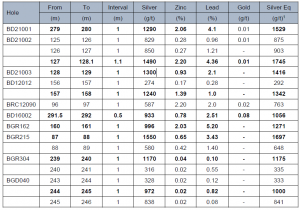 The company said that potential for substantially wider zones of ‘blowout’ mineralisation is being targeted where the feeder vein intersects the Eastern and Gully Faults. The company is also targeting further steep feeder vein zones in the central and southern parts of the Bowdens Deposit.

The company said that it now has four drilling rigs on site undertaking an expanded program of 30,000 metres of diamond drilling. SVL said that the program will test targets to define high-grade silver veins and feeder zones outside of the current Ore Reserve in the north, central, and southern parts of the Bowdens Silver deposit. Silver Mines said that this expanded drilling program is set to continue until at least the end of 2021.

The company said that the diamond drilling has continued to test the potential for underground mining scenarios with a focus on the Northwest High-Grade Zone, and more recently on the Aegean Zone in tandem with targeted diamond drilling of steep feeder veins. The Aegean Zone is a high-grade vein system located beneath the bulk-tonnage Ore Reserve in the Main Zone area of Bowdens.

The Northwest High-Grade Zone is still considered to represent a feeder conduit for the Bowdens Silver system with a close association between silver and gold in assays and vein textures.

The results of this program are expected to provide the basis for a resource estimation of potential underground mineable resources.