Red River Resources Limited (ASX: RVR) announced that encouraging initial results were received from the first-pass RC drilling program at the New Homestead and the Don gold prospects within its Thalanga Operations in northern Queensland.

The company said that first-pass RC drilling will be undertaken next at the Toomba gold prospect in early May.

Red River is seeking to build a multi-asset operating business focused on base and precious metals with the objective of delivering prosperity through lean and clever resource development.

RVR’s foundation asset is the Thalanga Base Metal Operation in Northern Queensland, which was acquired in 2014 and where RVR commenced copper, lead, and zinc concentrate production in September 2017.

At Thalanga, Red River produces zinc, copper, and lead with gold and silver credits but is also seeking to build its exposure to gold. Red River had applied for the Toomba and Don exploration tenements near Thalanga in 2020.

Red River announced high-grade results from the first-pass RC drilling program at the New Homestead and the Don gold prospects.

Red River reported that at the Don prospect, the drilling intercepted extensive quartz sulphide veining and associated alteration in multiple holes. The company said that assay results confirmed the presence of high-grade mesothermal gold mineralisation at shallow depths in a number of holes.

RVR said that multiple RC drill holes (DNRC001, 002, 003, and 004) intersected high-grade mesothermal gold mineralisation in the Main Vein at the Don, with high grade and wider lower grade intercepts demonstrating the Main Vein potential.  The company said that the gold mineralisation intercepted at the Don is open in all directions (strike and dip).

Important drill results from the Don prospect are as shown below. 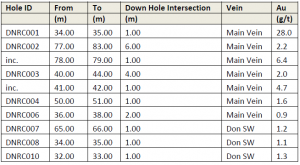 The company said that at New Homestead Prospect, drilling intersected quartz sulphide veining in several holes. Important drill results from the New Homestead prospect are as shown below.

Red River said that it plans to undertake first pass RC drilling at the Toomba gold prospect, which is currently scheduled to start in early May. The company said that the initial RC drill program at Toomba will comprise 13 holes for 1,379 metres.

We will continue to explore the Thalanga region for its gold potential, aiming to build our resource inventory at Thalanga while we also ramp up gold production at our Hillgrove Gold Mine in NSW.”