The company said that the drill drive was built to a size and standard to allow use for future mining activities.

POS said that two rigs are in position along the drive and have commenced the 13,000-metre Resource Definition drilling program. Poseidon said that further drilling of the highly prospective Southern Terrace will be undertaken from the new drill drive.

The company reported that the proposed development timetable remains on track with the first production from Golden Swan anticipated in 2022.

Commencing from the 450 level of the Silver Swan decline, the drill drive included 421 metres of drive development and 44 metres of stockpile development.

The company said that the drill drive was built to a size and standard to allow use for future mining activities. POS said that the new drill drive included the establishment of two dedicated drill positions to facilitate resource definition drilling of the Golden Swan mineralisation.

The company reported that this drilling program is expected to commence later this year or in early 2022 and is expected to add more high-grade nickel tonnes to the Black Swan mining inventory.

POS said that the drilling to test the down plunge extension of Golden Swan mineralisation was undertaken from the 335 Level off the Silver Swan Decline.

POS said that going forward, drilling will be undertaken from the Golden Swan drill drive to further test the Southern Terrace down plunge from the modelled EM plates.

The company said that the Southern Terrace remains open and prospective for further high-grade nickel sulphide mineralisation and the new drill drive provides a favourable platform from which to further test this area.

POS announced that it has commenced a 57-hole 13,000 metres Resource Definition drilling program at Golden Swan to increase confidence in the continuity of Golden Swan mineralisation to JORC 2012 Inferred and Indicated levels.

The drill program has been contracted to Webdrill. The company said that the program is scheduled to be completed in late July 2021 which should allow the reporting of the maiden resource for Golden Swan during the September quarter.

The company had extended the drill drive to provide a better position for the resource drill program. POS noted that the additional cost of extending the drill drive is almost matched by the reduction in budgeted drilling costs due to reduced drill metres.

The Company reported that it remains on track to exploit the high-grade/high-margin Golden Swan mineralisation in accordance with the proposed timetable. POS said that preparations are underway for mining activities to commence during the first half of 2022 with an internal target of producing saleable ore by mid-2022. The timetable is as shown below. 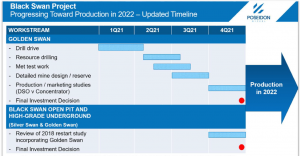 Poseidon Managing Director and CEO, Peter Harold, said: “As per the strategy announced in late 2020, we have now completed the dedicated drill drive which will provide an optimal drilling position to undertake resource drilling of the Golden Swan mineralisation at Black Swan. Importantly, mining contractor WestAuz completed the project without incident and to a high standard. The drive can also be used for mining activities, assuming Golden Swan hosts a mineable orebody.

Webdrill has commenced the Golden Swan Resource drilling program, which should take about three months to complete. This program will deliver us a maiden resource for the Golden Swan mineralisation and will allow us to test for any potential extensions to Golden Swan down plunge or along strike. In addition, the drill drive provides an ideal platform to drill test the highly prospective Southern Terrace.

From now on, shareholders can expect regular news flow as we report on the resource drilling activities, followed by the release of the maiden Golden Swan Resource, and assuming things go to plan, a Financial Investment Decision on the project by the end of this calendar year. That would likely put us in a position to be generating revenue by mid-2022.”