New Age Exploration – searching for gold in all the right places

This article is a sponsored feature from Mining.com.au partner New Age Exploration Limited. It is not financial advice. Talk to a registered financial expert before making investment decisions.

One Melbourne-based miner is proving that the ANZAC spirit is alive and well, working at a rapid pace to bring together a series of ‘highly-prospective’ gold exploration projects on both sides of the ditch.

And in doing so, NAE has found itself in the company of giants, securing tenements within a stone’s throw of some of the world’s great gold deposits including De Grey Mining’s (ASX:DEG) 6.8 Moz Hemi Gold Discovery, and OceanaGold’s (ASX: OGC) Macraes Gold Mine, New Zealand’s largest operating producer.

Piecing together a strategic package in the Pilbara

NAE has wasted no time in assembling its large tenement package in the highly competitive Central Pilbara district.

An additional exploration licence E45/5180 was acquired as part of the deal with Monterey, located near Marble Bar and adjacent to Novo’s historical Talga Talga gold project.

NAE holds options over a further four granted exploration licences, situated around 25km to the north and the northwest of Hemi. 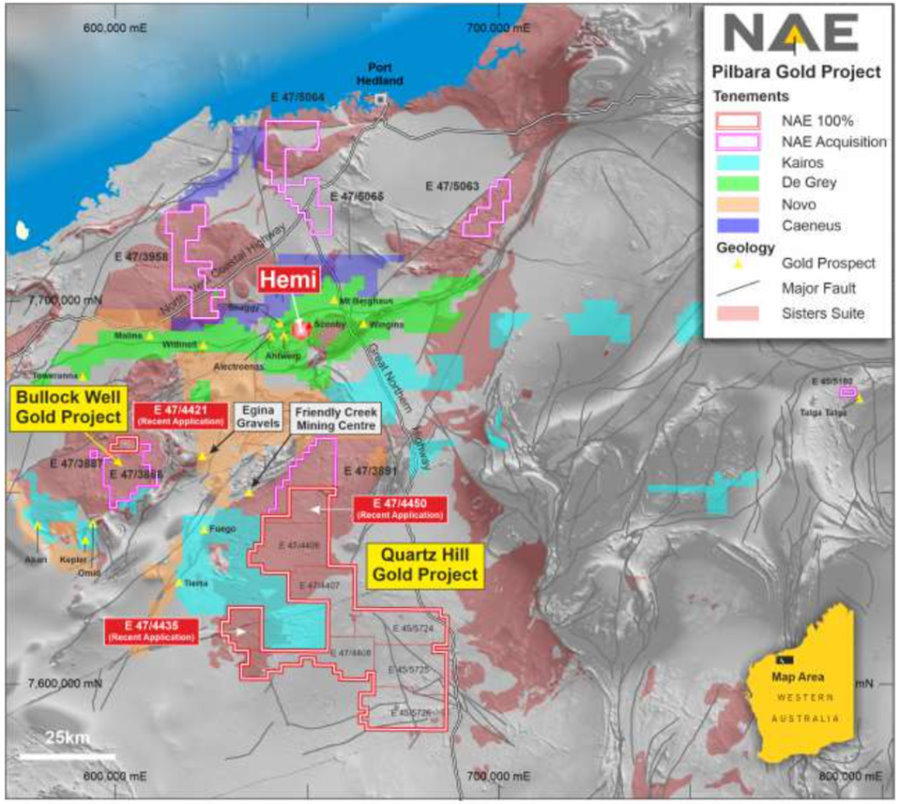 Although it’s not typically the topic of gold discussion in Australia, New Zealand is responsible for a hefty output of around 370,000 gold ounces annually, and if you listen to the local geos, still has a lot of unexplored potential.

The country has a rich gold mining history, with a series of rushes in the 1850’s leading up to the famed Otago rush of 1861, with exploration and commercial mining peaking during the late 19th and early 20th centuries. 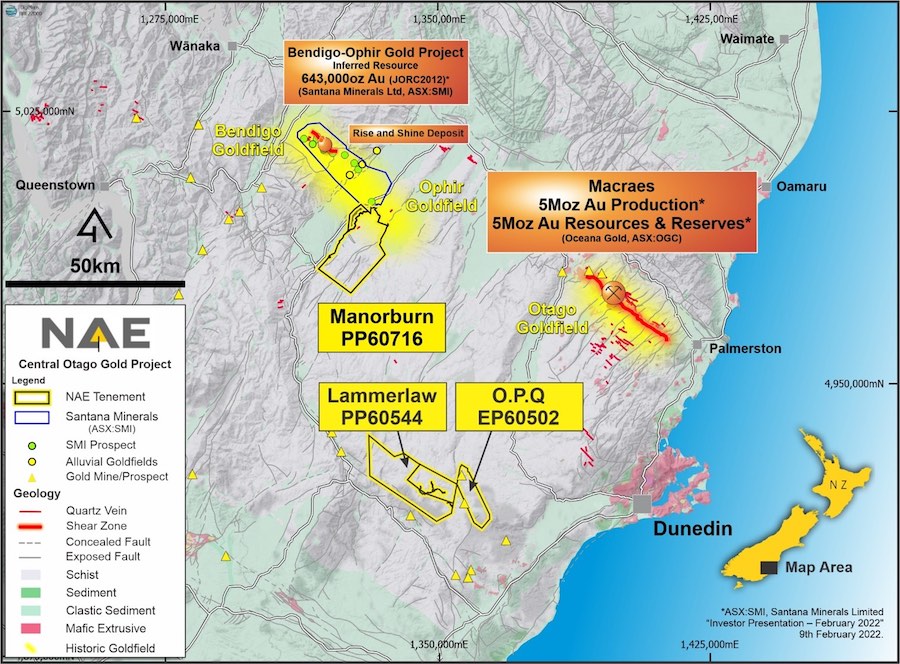 “The Central Otago Schist/Gold Belt” is regarded as one of the most highly endowed yet underexplored regions in New Zealand. The World Class Macraes Gold Deposit is the largest active gold mine in New Zealand with a Combined Production and Current Mineral Resource totalling in excess of 10 Million ounces of gold.”

New Zealand is responsible for a hefty output of around 370,000 gold ounces annually

Consisting of a large-scale surface and underground mining operation, Macraes has recently celebrated several key milestones, including the pouring of its five-millionth gold ounce and its 10,000th bar, both in 2019.

Following a competitive application process in December 2019, NAE was granted a 265 km² Prospecting Permit covering the Lammerlaw area in Otago, in what would become its primary New Zealand project.

The permit contains the historically-mined Bella Lode which was responsible for gold production through the late 1800’s at an average grade of 15 g/t over 0.6m to 1.8m thickness, before closure in 1901.

The permit also contains a historically-mined antimony lode and scheelite (tungsten) workings with minor occurrences of copper, silver, and mercury.

New Zealand’s largest alluvial gold deposit, Gabriels Gully, is located approximately 3km directly to the south of the permit. The deposit, whose source remains unidentified, has produced over 500,000 ounces and was the site of Gabriel Read’s gold find that led to the major gold rush of 1861.

Gabriels Gully has produced over 500,000 ounces and was the site of Gabriel Read’s gold find that led to the major gold rush of 1861

In total, 217 soil samples and 52 rock chip samples were collected for analysis by pXRF and fire assay, and structural measurements & lithological descriptions were collected at 61 outcrop locations.

Results from the program included 7 anomalous readings of between 12 to 33ppb gold, and 10 to 100ppm arsenic, pointing to potential for shear-hosted gold mineralisation along metamorphic boundaries.

Importantly, four of the anomalous gold and arsenic results were located near the historic Bella Lode mine, extending a soil anomaly to over 1.5km in strike, and up to 600m from the metamorphic boundary.

Mining at the OPQ reef stretches back over 100 years, yielding overall gold grades of 13 g/t. The reef averages 2m in width over a strike length of at least 1.2km, to a depth of 65m.

Exploration around the OPQ historic mine area by the Macraes Mining Company between 1991 and 1997 further demonstrated arsenic and gold soil anomalies over 1km of strike.

During 2018 and 2019, NAE undertook a series of soil sampling programs at OPQ Reef using hand auger and man-portable drills, resulting in the collection of 10 high-grade anomalous results ranging between 0.1 g/t and 2.5 g/t gold, and the identification of a potential ~6 km strike length.

Further exploration carried out in 2020 identified potential for shear-hosted gold mineralization along metamorphic boundaries within the OPQ permit.

Foot in the door at Manorburn and Marlborough

Exploration has recently kicked off at Manorburn, following the granting of a prospecting permit, with field mapping, surface geochemistry surveys set to commence, followed by drill testing of key target areas.

Management team delivers industry experience and skin in the game

The company is led by a highly-regarded and experienced board and management team that brings over 140 years of combined experience in the exploration industry, with support from leading technical consultants and on ground contractors.

Importantly, the board are substantial shareholders, controlling a combined stake of over 11%.

Chairman Alan Broome has over 40 years of experience in the mining industry including stints in coal mining, mining technology, equipment, services, and research sectors.

A metallurgist by trade, Mr Broome began his career at the Port Kembla Steelworks before joining the Australian Coal Industry Research Laboratories, which he led for more than a decade. He is a well-known personality in Australian mining, having served on the boards of a number of public and unlisted mining and mining technology firms.

Mr Broome is joined by Executive Director Joshua Wellisch, a corporate executive with a track record in executive management and directorships in ASX-listed companies. Mr. Wellisch has extensive experience in the energy and minerals sector, including acquisition, management, and development of mineral geological projects.

A member of the Project Management Institute, Mr. Wellisch is also a director of NRG Capital, a company that specialises in capital raising, business structuring, and ASX listing facilitation. Previously, he was a director of Toro Gold Limited.

The board is rounded out by company secretary Adrien Wing, a qualified CPA who brings experience with a series of ASX-listed companies.

2022 is set to be a milestone year for NAE, with exploration pushing forward across all projects.

The year kicked off with the successful granting of a prospecting permit for Manorburn, which was quickly followed by boots on the ground at the project. Numerous key target areas have been identified following a review of legacy exploration data, and field activities are set to include mapping and surface geochemical surveys.

At Lammerlaw, the recent summer field season saw NAE continue its ridge and spur soil sampling program along electromagnetic lineation in its search for mineralised shearing and veining. Gold assay results from infill soil sampling completed earlier in 2021 have provided a series of targets, with significant northwest trending gold-arsenic anomalies identified from 200m to 1,000m in strike extent.

The company is set to undertake Phase 2 trenching work at OPQ after obtaining an access arrangement to farmland on its exploration permit. The work will target areas where the basement schist is less than 2m from the surface.

Following this, a Phase 3 program comprising RC and diamond drilling will be developed to test the depth of southern strike extensions.

Back on the other side of the Tasman, NAE has completed 1,500m of its Phase 2 Pilbara drilling program which is testing multiple high-priority ‘Hemi Style’ and structural gold targets across the Brahman and Droughtmaster projects.

The targets, generated from deskwork that combined a series of geophysical datasets, will be subject to a further 3,500 of RC drilling.

Further geochemical soil surveys are also underway across all projects with helicopter and ground support.

“These are significant exploration opportunities with a very extensive pipeline of high priority exploration targets. We look forward to providing further updates as we accelerate our programs.”