Meteoric Resources NL (ASX: MEI) has announced the progress of ongoing porphyry drilling at the Juruena Project in Brazil.

The company said that the drill hole JUDD042, the first drillhole to test porphyry copper gold potential at depth for the giant IP chargeability anomaly detected in late 2020, has reached 841m.

Meteoric said that the hole will continue for approximately another 250m into the main copper-gold porphyry target, the Juruena Fault.

MEI reported that several zones of potassic alteration with pyrite were intersected and will be assayed for gold.

The company had designed the drill hole JUDD042 to test the main chargeability anomaly along line L1600, surveyed during the second half of 2020.

MEI said that the drillhole was drilled aiming to intersect the whole IP/Chargeability anomaly and then hit the projected Juruena fault system at depth. The company said that the geology expected at target is part of a large breccia pipe with magmatic hydrothermal alteration first investigated by Lago Dourado, in a shallow IP survey and some diamond and RC drilling.

MEI noted that the bornite/chalcopyrite mineral assemblages confirm that copper is present in this zoned magmatic hydrothermal system.

The company noted that the rocks have undergone intense brittle-ductile deformation resulting in strong phyllic alteration and complex vein arrays indicating Meteoric may be approaching its main copper-gold porphyry target, the Juruena fault, earlier than expected.

The alteration log for JUDD042 including detailed visual estimations of sulphide occurrence, style, and intensity is as shown below. 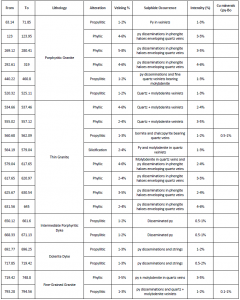 MEI said that the drilling so far confirms that they are within a major mineralised magmatic hydrothermal system. The company noted that the intercepted phyllic alteration zones (containing abundant sulphides) plus the mafic and porphyritic intermediate dikes (which also show considerable sulphide disseminations) conceivably explain the large chargeability anomaly generated in the 2020 Deep IP survey. The company noted that the drilling also confirms that they are only now approaching the intersection of the Deep IP chargeability anomaly and the Juruena fault, a priority copper-gold porphyry target.

Meteoric Managing Director, Andrew Tunks said: “We are intersecting the right rocks and alteration styles to indicate we are within a major magmatic system. From around 600m depth we have been logging quartz molybdenite veins and from 700m we have progressed into a zone with quartz, chalcopyrite bornite veins.

We appear to be entering a zone of intense alteration overprinting porphyritic and mafic intrusives cut by hydrothermal breccias all with abundant stockwork veining. The hole will continue for approximately another 250m into our main copper-gold porphyry target, the Juruena Fault.”