Legacy Iron Ore Limited (ASX: LCY) announced that the drilling completed in December 2020 at the Yilgangi gold deposit in WA has returned strong results including 9m @ 5.78 g/t, increasing confidence in the known mineralisation at the Rainbow and Golden Rainbow prospects.

LCY said that 13 RC holes were drilled for 854m and the intersections confirm continuity of mineralisation.

Legacy Iron had drill tested all four of its Yilgangi tenements in the final 2020 RC drill program of the year in December. A total of 13 RC holes (YGRC001 – YGRC013) were completed for a total meterage of 854 m.

The company said that promising results were received from drilling at the Yilgangi gold deposit, part of South Laverton Gold Project in Western Australia.

The company announced that drilling intersected a broad mineralised zone from surface adjacent, and along strike of the Rainbow prospect.

Significant Intercepts from Yilgangi RC drilling in December 2020 are as below. 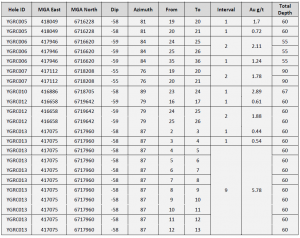 LCY reported that the analysis of the drill results shows growing confidence in the known mineralization at Rainbow and Golden Rainbow prospects, including greater continuity across the prospects. The company said that the strike length and orientation of mineralization as indicated from historic and the recent drilling shows potential for very good continuity between prospects,

LCY said that further drilling would be done for Yilgangi prospects in 2021. The company said that the next phase of RC exploration drilling at Yilgangi is currently being planned.

The company said that the next phase of exploration drilling would include testing continuity of orientation along the main strike length and potential of layered or splayed mineralized quartz rich zones adjacent. LCY said that further infill drilling to continue proving up the mineralization at depth will also prioritize the next phase of drilling.

Legacy said that this recent drilling data will be combined with all historical drilling data and interpreted to update the mineralized lodes in the prospect. The company said that the planning for future exploration and infill drilling is underway and further geological analysis is being pursued to understand the gold emplacement setting terranes.

LCY Chief Executive Officer Rakesh Gupta said: “The drilling has identified some outstanding intersections, and of particular importance is that much of the mineralisation is close to surface.

We are encouraged with these results as it provides further confidence of additional mineralisation in the area and more importantly a potential linking of known mineralisation into a larger geological system. The Yilganji deposit could act as a satellite deposit to the Mt Celia Project.”