Frontier Resources Limited (ASX: FNT) has announced high-grade final results from its trench sampling and mapping program along a ‘Flexure Zone’ at Kimono Central in PNG, where two drill targets, KC North and South, were identified.

FNT said that the recent trench sampling program confirms the continuity of high‐grade gold within a 360m long flexure zone at Kimono Central where two drill target areas have been defined.

Frontier had recently commenced an exploration program aimed at testing for lateral extensions of known veins and interpreted vein systems at Kimono and Saki prospect areas.

The company recently completed a trench sampling and mapping program at the Kimono Central Vein in Papua New Guinea. The Phase 2 work completed at Central Kimono included fifteen hand dug trenches totalling 232.5 metres ranging from 5.0m to 41.0m in length. A total of 218 chip‐channel trench samples were collected from 10 trenches (KC23‐30 & KC33) along the ‘high grade’ flexure segment of the Kimono Vein with an aim of defining drill targets for drill testing in Term 2 of the licence.

The Kimono Central Vein trenches were dug between Suwaitana and Gaiv creeks over a distance of about 360m aligned NNW‐SSE. Trench KC27 was located approximately 370m further to the southeast.

Kimono Vein Trench summary highlights and geology is as shown below. 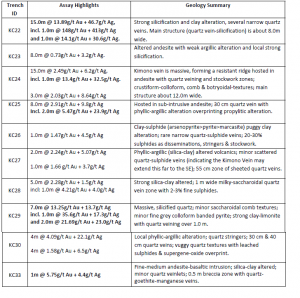 Tassy Vein Trench summary highlights and geology is as shown below.

FNT said that the trench mapping indicated two structural trends, a strong WNW trend indicating a possible splay vein between the Kimono and Tassy veins, and a strong NNW trend indicated by veins and structures which may correlate with veining mapped and sampled in Suwaitana Creek.

Frontier said that ALS laboratories have recently completed the final assay results for 54 rock chip/grab samples collected at Kimono. These will be released upon final interpretation.

The company said that it is currently planning for a mobilisation to the Saki prospect 7th June to continue with its surface trench sampling program as part of its JORC Resource planning.