Firefinch Limited (ASX: FFX) announced that the drilling to test extensions to mineralisation at Morila Pit 5 within the Morila Gold Mine in Mali has returned further excellent results including 58m at 1.75g/t gold from 91m.

The company said that the results confirm the thickness and tenor of mineralisation present outside the previously mined Morila Super Pit, with positive implications for high-grade mineralisation elsewhere at Morila.

Firefinch said that the diamond drilling has commenced at Morila Super Pit at the NE target.

Morila Pit 5 is a satellite deposit located on the western margin of the Morila Super Pit. Morila Pit 5 currently has an Indicated and Inferred Mineral Resource of 840,000 tonnes at 1.1g/t.

Based on these intersections, the Company implemented a drilling program of 23 holes for 2,422 metres to test for extensions to the north of Pit 5, along the western side of the Morila pit. The company has now reported encouraging results from this programme

Firefinch has now reported further positive results from drilling at Pit 5, with 4 of the 23 drillholes ended in mineralisation (SE87, SE89, SE97, and SE105).

Significant intersections from the Pit 5 prospect are as shown below. 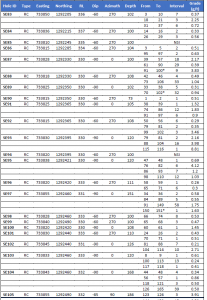 Firefinch reported that drilling results are being integrated with the broader Morila mineralisation model. Once this is completed, a new Mineral Resource will be estimated for Pit 5, and an Ore Reserve defined.

The company announced that it has commenced its first diamond core drill hole at the Morila Super Pit to test for extensions to high-grade mineralisation intersected in historical drilling beneath the pit floor at the Morila NE target. Prior drilling in this area had returned intersections such as 14m at 21.7g/t from 119m downhole (RCX2814) and 6m at 9.0g/t gold from 146m downhole (RCX2995). These results represent just some of the high-grade drilling intersections present outside the mined open pit at Morila.

The company had previously reported a number of outstanding intersections outside the mined pit including 56m at 4.97g/t gold (SAN540) and 29m at 6.23g/t gold (SAN216). FFX said that there will be an increased focus on drilling to target extensions to such high-grade mineralisation.

FFX said that it is anticipating that testing of each target will yield data which can be applied to refine the targeting model for Morila. Firefinch said that drilling is being carried out by Capital Drilling, with a second diamond rig planned to arrive shortly to accelerate drilling.

Firefinch’s Managing Director Michael Anderson said: “It is very exciting to start our search for high-grade mineralisation below the Morila Super Pit, and I look forward to seeing the drill core from this initial program.

The results at Pit 5 are evidence of the mineralisation and remaining opportunity in the Morila system, and we are looking forward to a sustained exploration and resource development strategy to unlock its full potential.”