Firefinch releases Life of Mine Plan for Morila

Firefinch Limited (ASX: FFX) has announced the details of its new Life of Mine Plan (LOMP) for the Morila Gold Mine in Mali.

The company said that the new LOMP envisages an annual average production of 160,000 ounces of gold from 2022 to 2030 via the mining and processing of some 37.5 million tonnes at 1.33 g/t gold for 1.45 million recovered ounces of gold.

FFX said that the initial period of the LOMP (2021 to 2028) incorporates mining of Probable Ore Reserves of 23.8 million tonnes at 1.40g/t gold for 1.07 million contained ounces of gold and returns an undiscounted pre-tax cashflow of US$604 million.

Firefinch said that the extension and infill drilling at the Morila Super Pit would commence in June 2021 with the aim of improving the grade, confidence, and size of resources and reserves.

Some 21.3 million tonnes of tailings were also reprocessed giving a total gold production from mining and re-processing of 6.9 million ounces at an overall recovery of 91%.

New LOMP for Morila gold mine

Firefinch has now provided details of its Life of Mine Plan (LOMP) for the Morila Gold Mine.

The key metrics from the LOMP are as shown below. 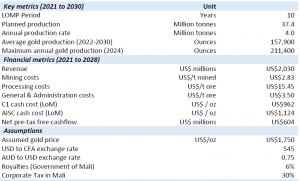 The LOMP envisages that tailings production via hydraulic mining will progressively ramp down and cease by December 2021. LOMP assumes that the production will increase through mining of Morila Pit 5 (adjacent to the Morila Super Pit) and the satellite pits (Koting, N’Tiola, and Viper) at a rate of up to 3 million tonnes per annum.

FFX said that pre-strip and the delivery of ore from the Morila Super Pit will ultimately overlap satellite pit mining, and the predominant ore feed will be from Morila by Q1 2023, when production will ramp up to approximately 4 million tonnes per annum. It is anticipated that feed from the satellite pits will continue to provide optionality.

Stage 1 of the LoMP, which comprises the Ore Reserve pit designs, includes 15% Inferred Mineral Resources. With the inclusion of Stage 2, the proportion of Inferred Resources in the LOMP as a whole rises to approximately 30%. The average strip ratio for Stage 1 of the Morila Super Pit, inclusive of the Inferred mineral resource is 6.1:1, and the AISC is US$1,124/ounce.

FFX said that drilling is planned to test for extensions of very high grades in drilling to the east and north-east of the Morila Super Pit to investigate the potential for underground mining. Firefinch said that extension and infill drilling at the Morila Super Pit will commence in June 2021 with the aim of improving the grade, confidence, and size of resources and reserves.

The company said that a scoping study has commenced to determine the viability of mining these resources from underground and to guide infill and extension drilling of the resources. In addition, the study will investigate the optimum open pit to underground mining transition. This may result in ore currently planned to be mined via the Super Pit to be mined from underground.

Firefinch Managing Director, Dr. Michael Anderson said: “We are delighted with the outcome of the new Life of Mine Plan, which affirms Morila as a very profitable and long-life mining operation. The rapid ramp up to annual production of 150,000 – 200,000 ounces highlights the unique advantage that Morila has in leveraging sunk capital.

It is worth noting that the new plan is based upon existing drill data supplemented only by drilling at the satellite pits. Tellingly, we have yet to drill a hole at the Morila Super Pit – our main focus, and we are very excited to follow up the many obvious targets with the realistic aim of adding significantly to the current resources and reserves.

As a Company we will continue to contribute significantly to Mali and its people and look forward to doing so. Approximately US$895 million is expected to be contributed in taxes, royalties, wages and salaries, and local procurement over the next 10 years, meaning our operation will substantially benefit shareholders and local stakeholders alike.”