Estrella Resources Limited (ASX: ESR) announced that it has continued to intersect several significant bands of massive nickel-copper-iron sulphides breccias within a 28m zone of nickel-copper-iron mineralisation in its Phase 3 diamond drilling program at the Carr Boyd Nickel-Copper Project, located ~80km north of the City of Kalgoorlie-Boulder in WA.

ESR reported that the drill hole CBDD054A intersected 28.0m of massive, globular, and disseminated Ni-Cu sulphides. The company said that 10.8m massive sulphide breccias and semi-massive sulphide occur throughout the mineralised zone. ESR said that the true width is estimated at 14m based on surrounding drillholes.

The company announced that wedge hole CBDD054B is currently in progress to follow up above this intersection.

The company had recently commenced a Phase-3 drilling program at the Carr Boyd project to test the T5 basal contact by stepping out around the known mineralisation to understand the flow dynamics surrounding the T5 deposit. Phase 3 is currently underway with two diamond drill rigs.

ESR had reported the intersection of massive sulphides in DD hole CBDD054 on 1 June 2021, increasing the defined mineralised area within the Upper T5 conductor which remains open north and south.

The company said that the DD hole CBDD054A was wedged off the CBDD054 parent hole and lifted to a position on the basal contact 25m above the previously announced intersection of massive sulphides in CBDD054.

Estrella reported that the drillhole CBDD054A intersected a sequence of massive and semi-massive sulphides intermixed within a halo of globular to disseminated and stringer sulphides just off the basal contact at T5.

The company said that based on the sulphide intersections in CBDD030, CBDD033, and CBDD054 the true width of the mineralised zone is approximately 14m.

Visual estimation of sulphide percentages in CBDD054A is as shown below. 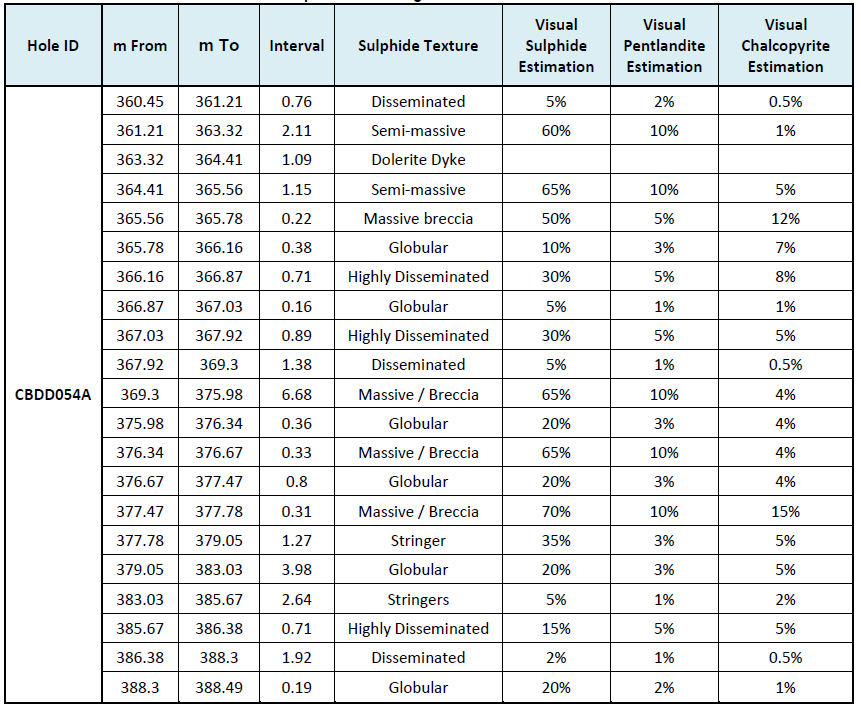 ESR said that the sulphides within CBDD054A show a history of local massive sulphide remobilisation and globular sulphide settling along the T5 basal contact. The T5 contact has been interpreted as a flexure at the base of the Carr Boyd, T5 pyroxenite feeder zone. This flexure has changed the flow dynamics of the rising magma and allowed transported sulphides to settle out onto the basal contact. Geologists refer to this as a sulphide “trap site”.

The company said that diamond drilling and DHTEM geophysical testing is ongoing.

ESR said that the spacing used for the initial Phase 3 drilling will enable the Company’s geologists to gain a much more detailed understanding of the mineralisation dynamics at T5, enabling a better interpretation of historical drilling intercepts and a more targeted approach to exploration during the latter stages of Phase 3 and the step-out Phase 4 drilling.

Estrella noted that the orientation of the basal contact that so far has produced the right conditions for the settling of nickel-copper sulphides appears to continue for some considerable distance and Phase 4 will be aimed at testing this to the fullest extent.

Estrella Managing Director Chris Daws said: “We are further bouyed by this impressive 28-metre intersection which contains significant bands of massive nickel-copper-iron sulphides. Our Phase 3 drilling campaign continues to provide further evidence of significant quantities of sulphides being present within the T5 discovery area at Carr Boyd which remains open north, south and at depth.

Our understanding of the geological setting and controls at Carr Boyd is increasing with every drill hole and remain confident that the geological model is correct. With A$11.3M of option funds now fully underwritten the Company has never been in a stronger posiiton to unravel the geological secrets that exist at Carr Boyd. I look forward to updating shareholders and the broader market as results are obtained.”