The company said that 12 Rare Earth Element (REE) prospects have been identified in the south-eastern area of the Mangaroon Project. DRE said noted that the TREO and the Nd2O3+Pr6O11 results from Yin exhibit similar characteristics to Hastings Technology Metals Limited’s Yangibana project.

Dreadnought said that adjacent ground has recently been applied for and a field crew is currently undertaking further sampling and assessment of Yin and other prospects, with additional assays expected in July 2021.

The company said that the nickel and gold exploration programs are continuing at Mangaroon and mobilisation to the Kimberley remains on schedule with drilling to commence at the Texas Ni-Cu-PGE target in June 2021.

The company announced that from previously unsampled ironstone outcrops at the Yin prospect, high-grade REE assays were received, including assays up to 11.2% Total Rare Earth Oxide (TREO), including 3.6% Nd2O3+Pr6O11 from MNRK0284.

Significant rock chip results from the Yin and Y2 prospects are as shown below. 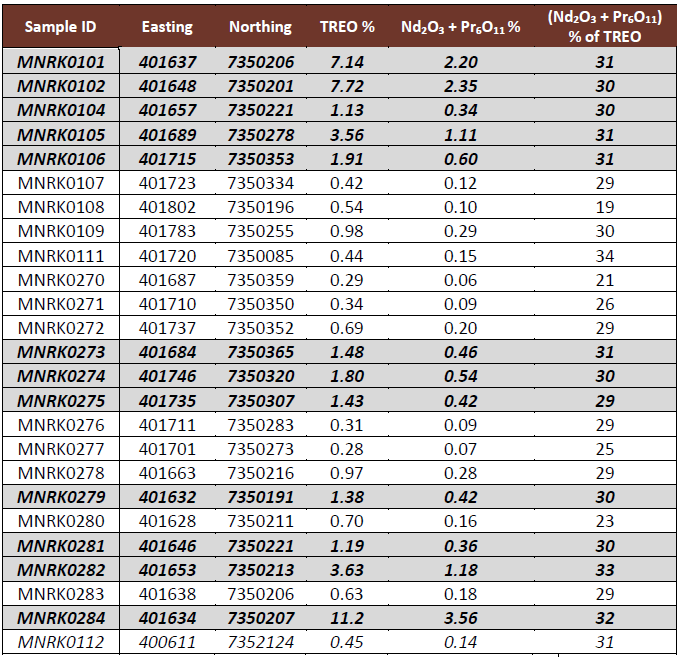 DRE said that to date, twelve REE prospects have been identified based on thorium radiometric anomalies coincident with apparent ironstone outcrops. The company said that high-grade rock chips were taken from the Yin prospect where ongoing field work has traced the ironstone over 2.5km of strike.

Dreadnought noted that eleven other REE prospects remain to be inspected and field work is currently being undertaken to assess these prospects in addition to the strike extents of Yin.

Mangaroon is located ~15kms southwest of the Yangibana REE Project which is currently under construction and development by Hastings Technology Metals Limited. The company reported that the TREO results and the Nd2O3+Pr6O11 component from Yin, exhibit similar characteristics to Yangibana.

The company reported the following completed and ongoing Work Programs at Mangaroon.

The company reported the following upcoming news flow for the next three months.

Dreadnought’s Managing Director, Dean Tuck, said: “The number of prospects identified, combined with the high-grades of rare earths at Yin has been an interesting development for us at Mangaroon. Further work is underway to determine the potential scale and implications of this opportunity.

In the interim, we remain focused on drilling at our Kimberley project with rigs and personnel mobilising on schedule in June 2021.”