The company said that follow up drilling would commence as soon as approvals are granted.

DGO reported that it has met the Stage 1 Commitment under the Heads of Agreement with Investigator Resources and will continue to the next-earn in stage.

The company also reported the exploration progress at Bryah, Yerrida, and Black Flag.

The company had recently completed a proof of concept reverse circulation drilling program of 44 RC holes for 3,733m at Pernatty, 55km southwest of Oz Minerals’ Carrapateena copper-gold mine in SA.

The company announced that the drilling at each of the three target areas 30km to 40km apart – Moseley, Maslins, and Winnie Pinnie – intersected copper-cobalt-silver mineralisation.

The company reported that Zambian-style copper mineralisation was intersected from the drilling at Pernatty. DGO said that copper grades greater than 0.1% were intersected at all three areas drilled in the target transition zone

The company reported that the best intersections were at Moseley where three holes over 1.5km across the targeted Adelaidean basin margin all had 1m assays greater than 0.5% Cu with associated elevated Co and Ag at depths of 50 to 80m.

The company reported that ~ 10 km of strike of the target transition zone centred around the drilled Moseley section had no previous exploration and this drilling shows the target depth is less than 100m. DGO said that this area would be a priority for follow up drilling.

DGO said that at Maslins, three holes had 1m assays greater than 0.7% Cu at depths of between 70 and 150m, with a best intersection of 0.7% Cu and 15g/t Ag at a depth of 146m. Importantly, in one of the mineralised intersections, the elevated copper values extended more than 5m above the base of the Tapley Hill Formation (Including 1m @ 0.65% Cu and 10.1g/t Ag from 75m) indicating the potential for the development of relatively thick ore zones in this area.

DGO noted that the drilling at Maslins indicated that the mineralisation is more likely at a shallower basin position (i.e. west) of the Maslins holes. The company said that a native title agreement is being progressed to access this area.

The company said that at Winnie Pinnie, four holes had 1m assays of greater than 0.2% Cu at depths between 30m and 50m, one of which intersected 1m @ 0.25% Cu, 0.04% Co and 7g/t Ag from 26m at the western edge of a 2.5 x 5km area where the prospective base of the Tapley Hill Formation is approximately 100m deep and is untested by previous drilling. The company said that this target is a priority area for follow up drilling. 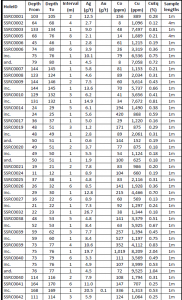 DGO reported that it has notified Investigator Resources Limited that the Stage 1 Commitment has been met and elects to earn 51% under the binding Heads of Agreement between DGO and Investigator. DGO can earn an 80% interest in the tenements held by Investigator at Pernatty over 5 years.

The company reported the exploration progress at Bryah, Yerrida, and Black Flag.

DGO said that at Bryah, diamond drilling had commenced in late February 2021. The company said that to date, two holes have been successfully completed in Target A and one hole is currently in progress in Target B. Drill core from the first 2 holes is currently being processed for assay while drilling continues.

The company said that at Yerrida, a program of 1,913m of air core drilling in 37 holes was completed in December 2020 to test geochemical targets defined in the previous round of drilling.

DGO said that at Black Flag, 30km north of Kalgoorlie, fifteen RC drill holes were completed for 2,098 metres of drilling in December 2020 and January 2021.

The company said that the follow up drilling to test the targets generated by this drilling is being planned and will commence as soon as government and heritage approvals are granted.