Challenger Exploration (ASX: CEL) has announced high-grade intercepts including 130.8 metres at 2.5 g/t AuEq from the 5 rig 45,000 metre drilling program at its flagship Hualilan Gold Project in San Juan Province, Argentina. The company said that the intercept confirms the discovery of a significant new high-grade gold zone in intrusives south of the Magnata Fault.

CEL also reported the discovery of gossanous outcrop with skarn alteration and visible gold at surface up-dip from this intercept, suggesting mineralisation extends to surface. The company said that the new zone correlates with earlier intercepts in GNDD-079, GNDD-032, and GNDD-089 north of the Magnata Fault.

CEL said that the new block of mineralised intrusives cover 500 metres of strike, a vertical extent of 400 metres from surface, and true width of 50 to 100 metres which is open in all directions.

The Company has previously reported results for 200 to 303 metres downhole for which assays were fast tracked, with this previously announced section returning 12.0m at 20.9 g/t AuEq including 4.10m at 56.8 g/t AuEq.

Challenger has now announced that the complete results for GNDD-157.

CEL reported that the results from GND-157 have confirmed the discovery of a significant new zone of high grade mineralisation in intrusives south of the Magnata fault.

All significant intercepts from GNDD-157 are as shown below. 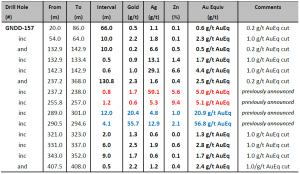 The Company now interprets these zones of mineralised intrusives north and south of the Magnata Fault as one large zone, which extends north-south over 500 metres of strike and remains open in both directions along strike. Mineralisation has been defined over 400 metres vertical extent from surface and remains open at depth.

The company said that following the discovery of new zones of mineralisation in drill holes GNDD-134 and GNDD-157, and GNDD-142 (40.5m at 6.2 g/t AuEq) in addition to the number of holes recently completed (assays pending), a series of new holes and extensions to existing holes have been planned.

The Company said that the amended drill plan will incorporate a number of holes to extend the recent high-grade discovery in GNDD-142 which returned 40.5m at 6.2 g/t AuEq below the Sentazon Manto.

CEL is currently waiting on assays for drillholes GNDD-174, and GNDD-189 with GNDD-195 currently being drilled.

The company said that deeper holes to test downdip of GNDD-157 are planned which may involve new holes or extending GNDD-020 and GMDD-041.

The company said that it is also planning to investigate further drilling requirements to upgrade both the unclassified mineralisation and mineralisation in the existing historical resources to meet JORC 2012 requirements; initial drill program comprising verification (twin holes) and targeting extensions of the historically defined mineralisation; and metallurgical test work.

CEL Managing Director, Kris Knauer, said: “This is yet another transformational result from our flagship Hualilan Gold project. This intercept of 131 metres at 2.5 g/t gold equivalent has confirmed that a known zone of 100 metres length covers at least 500 metres of strike, 400 metres of vertical extent, and remains open in all directions. Additionally, this result demonstrates the potential for some serious grade, particularly when coupled with the discovery of visible gold at surface 300 metres up-dip.

We are waiting on assays for six more drill holes which were designed to expand this new discovery. Further, we are currently drilling two more holes designed to test the limits of this new zone with a number of follow up holes programmed. Our Hualilan Gold Project continues to deliver new and exciting results.”