The program was designed to provide data for inclusion of the near surface mineralisation, originally defined by underground sampling, in a JORC resource estimate.

Selected results from Channel Sampling in main Decline at Cerro Norte are as shown below.

The company said that rock saw cut, representative, channel sampling has identified high-grade zones that were previously untested and the results correlate well with high-grade drill intercepts down dip.

CEL said that the results suggest the mineralisation is thicker than expected and that the historical selective channel sampling has missed much broader zones of near surface mineralisation. The company noted that this is a significant step supporting CEL’s strategy to deliver a high-grade shallow resource that should enable a low capex, high margin starter mining operation.

The company had commenced an underground channel sampling program to allow the inclusion of the component of the historical high-grade mineralisation. This included the majority of the mineralisation within 40 metres of surface and the extensions of mineralisation up into the hills at Cerro Norte and Cerro Sur.

The company said that the sampling was done using a rock saw to cut and recover a continuous channel measuring approximately 40cm x 40cm, with sample weight averaging 4.8 kg per metre. Samples were logged and submitted for assay with QAQC samples using the same procedure as drill core.

CEL said that the first channel samples were taken from the Main Decline at Cerro Norte and are the first known continuous sampling undertaken down the Decline. Sampling was also undertaken across sections of the roof of the Decline and vertically on the Decline walls to better define the mineralisation in three dimensions.

The first channel samples were taken from the Main Decline at Cerro Norte and are the first known continuous sampling undertaken down the Decline.

Complete Channel Sampling results of Main Decline Cerro Norte are as shown below. 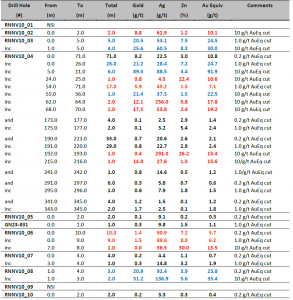 The company said that the Channel Sampling program has been significantly expanded given the highly encouraging results including the high-grades encountered which indicate that the near surface component of the historical mineralisation tends to contain high grades; the channels defining the up-dip extensions of high-grade shoots identified in CEL drilling; and the confirmation of broad zones of mineralisation that were missed by the selective historical sampling which may be important in the context of potential open pit mining.

CEL said that the program of underground Channel Sampling has been extended to cover all of the safely accessible historic underground shafts, adits, and tunnels at both Cerro Norte and Cerro Sur.

The company said that the channel sampling in some of the tunnels which were cut by the Main Decline, and other historical workings at Cerro Norte, and Muchilera (Cerro Sur) has been completed and samples submitted for analysis.

CEL Managing Director, Kris Knauer, said: “These near surface results are exceptional and continue to reinforce our belief we have a significant gold system at our flagship Hualilan Gold Project in Argentina.

We can see that mineralisation is wider than expected near surface; and has; a strong correlation with high-grade drill hole results down dip; and historical sampling based on the presence of visual sulphides missed broader near surface zones.

This is a further important step in delivering on our strategy to become a globally significant gold producer initially targeting high grade shallow mineralisation.”