Caravel Minerals Ltd (ASX: CVV) announced that the results from the RC percussion drilling program at the Dasher Deposit, Dasher East Prospect, and Dasher South Prospect within the company’s namesake Caravel Copper Project in Western Australia indicates potential for extension of resource at Dasher South, and confirm continuity of the mineralised zone at shallow depths elsewhere.

The company said that the drilling results will be incorporated into an updated resource estimate for the Dasher Deposit that will subsequently be utilised in the current PFS for the overall Caravel Copper Project.

The company had commenced a reverse circulation (RC) percussion percussion drilling program at Caravel Copper Project aimed to infill and extend known mineralisation in the shallower parts of the Dasher Deposit and the nearby Dasher East and Dasher South Prospects.

CVV said that a total of 16 holes were completed, for a total of 2,634 metres of percussion drilling.

The company said that at the Dasher South Prospect area, significant zones of copper-molybdenum mineralisation were intersected which is the interpreted southern continuation of the Dasher Deposit. CVV said that the mineralisation was better grade and occurred over a wider interval than anticipated from the existing geological model.

Caravel reported that narrow zones of mineralisation were intersected in the drilling at the northern and southern ends of the Dasher Deposit and the Dasher East Prospect, within north-south trending, moderately east dipping zones.

The summary of significant intersections (greater than 0.15% Cu cut-off grade) is as shown below. 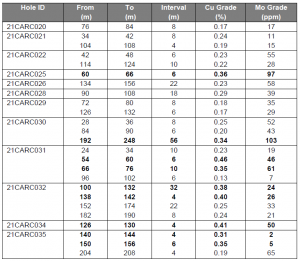 The company announced that the results of the RC percussion drilling program completed at Dasher Deposit and associated prospect areas will be integrated into an updated geological interpretation and resource estimate for this area.

CVV said that the updated resource estimate will be incorporated in the current feasibility studies for the Caravel Copper Project.