The company reported that the Taipan Discovery Zone (TDZ) was discovered by hole TC21-03 and features 39.70m of continuous DSS, SMSV, and MSV unweathered mineralisation from 15.15m.

BSX said that the discovery was made in the first drill-hole of a previously untested zone within the Ta Cuong prospect.

Blackstone said that follow up drilling is being planned to test several proximal EM geophysics targets as well as the extent of the intensely mineralised TDZ.

The company said that Ta Cuong and now the TDZ within it has the potential to add significantly to Blackstone’s massive sulfide mining inventory, providing further impetus for the restart of the Company’s existing 450kt concentrator.

Ta Cuong prospect within the Ta Khoa Nickel–Copper-PGE Project in Vietnam is a Nickel-PGE-Cu-Co MSV prospect located 6km along strike from the recently operating Ban Phuc MSV nickel mine and existing processing centre.

The Ta Cuong prospect is associated with the Ban Khang intrusive complex and is proximal to a major regional fault zone which also transects the Ban Phuc, King Snake, and Ban Chang MSV zone.

The company reported that Taipan Discovery Zone (TDZ), a previously untested zone within the Ta Cuong prospect, was identified as a result of ongoing systematic testing of mapped Electromagnetic (EM) conductors.

Sulfide mineralisation zones in TC21-03 are as shown below. 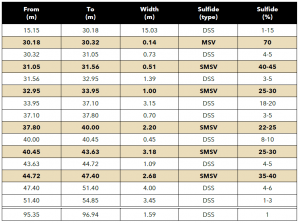 The Company said that it expects to provide an update regarding ongoing drilling at Ta Cuong, the anticipated King Snake assays, along with results from infill drilling at Ban Chang and Ban Phuc DSS over the coming weeks.

Blackstone Minerals said that it proposes to conduct further drilling and associated activities to better define and extend the identified mineralised zones.

The Company said that it is now advancing the Ta Khoa Project through to a Prefeasibility Study which will contemplate the option to mine higher grade MSV deposits, which has the potential to reduce upfront capital requirements by enabling the Company to restart the existing Ban Phuc Concentrator (450kt).

Blackstone Minerals’ Managing Director Scott Williamson said: “We are very pleased to report a significant discovery at Ta Cuong. The discovery hole at TDZ is one of the best Blackstone has delivered on its MSV targets. The TDZ remains open along strike and significantly adds momentum to the MSV strategy at Ta Khoa.

So far, all three priority MSV targets have delivered impressive and high value intersections. We are excited to be systematically unveiling the potential of the Ta Khoa Ni-Cu-PGE district and will continue an aggressive exploration program, representing the most cost-effective and value accretive pathway to secure supply for our downstream business.”