This article is a sponsored feature from Mining.com.au partner Belararox Ltd. It is not financial advice. Talk to a registered financial expert before making investment decisions.

When you’re the new kid on the block, you have to fight for your place and for any recognition.

In mining, if you’re a young exploration company but can attract an industry stalwart such as Neil Warburton to your board as Non-Executive Chairman, you’ve definitely got the right stuff.

Belararox (ASX:BRX) is the new kid in town, having floated on the ASX in January this year, raising $5.06 million in its initial public offering (IPO) through the issue of 43 million shares priced at 20 cents.

The company is focused on securing and developing resources to meet the soaring demand from the technology, battery, and renewable energy markets.

To achieve this, Belararox has in its portfolio the Belara zinc-copper-lead-silver-gold project located 100km north-northeast of Orange in Central New South Wales, and the Bullabulling gold-nickel project in Coolgardie, Western Australia.

But the Perth-based newly listed junior is no Johnny-come-lately.

Belararox Managing Director Arvind Misra explains: “What underpins our story is the fact that we already have a resource.”

The Belara polymetallic project has historically been drilled out and previous owner, Ironbark Zinc (ASX:IBG), advanced the asset through to a scoping study which defined an Inferred Resource of 1Mt at 5% zinc, 0.4% copper, and 1.5% lead.

“So, a lot of new companies will come onto the (Australian Securities) Exchange and have some ground or will be staking the ground saying, ‘there will be a mine here and a mine there’, or ‘there’s one nearby so hence we’ll find something’.

From our point of view, we know there’s a few million tonnes technically there, but that could be a lot more million tonnes by August when we announce our maiden resource… there’s a good chance of that.

What we’re finding from our drilling is it seems the resource is rich in copper at the top, but as it goes down deeper it becomes thicker and more rich in zinc.” 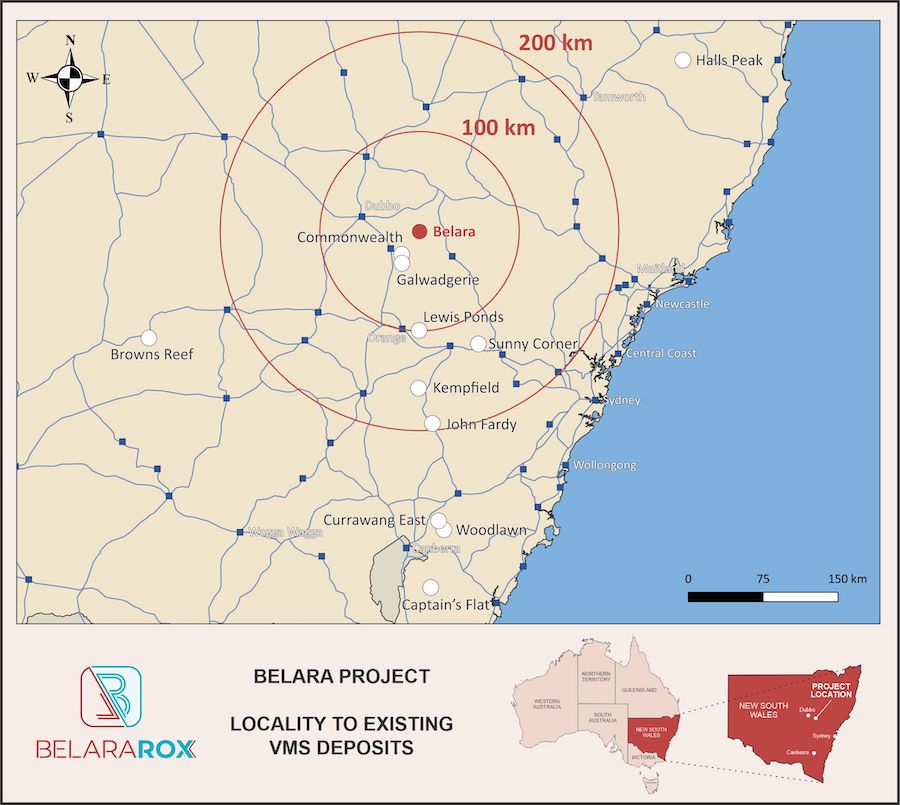 As zinc and copper prices in particular are higher now than when Ironbark held the Belara asset, Belararox will be able to reduce cut-off grades, making it more economical to advance into production.

“We definitely believe that there’s going to be a mine there with the current resource that we have.”

Belararox to march to the beat of its own drum

While a scoping study had already been undertaken by Belara’s previous owners, Belararox intends on advancing the project through all the necessary feasibility stages starting from its own scoping study.

“Hole 9 has a similar metal value as expected and hole 11 has about twice as much value, exceeding our expectation. We expect results similar to hole 9 and 11 for the holes pending in the labs.”

The company has 1,551 assay results pending, to be announced in the coming six weeks, with 16 RC holes for 3,084m remaining to be drilled from its Phase One drill program, which is expected to be completed in July.

Resource estimation studies are also due to begin next month.

With $3.4m cash at hand, Belararox is well-funded for the current drill program and some part of the immediate extension. It appears the next stages will require significantly more drilling, which could ultimately prove a potential resource many times the current size.
That also means at some stage having to go back to the market to raise more capital to fund the expansive drill works.

The Belara project is a zinc and copper-heavy resource, with lead, silver, and gold.

The occurrence of lead is widespread, and while it’s been useful to humans for thousands of years, today lead is used in batteries for vehicles, pipes, pigments, and ammunition, among other uses. Zinc is the fourth most common metal in use after iron, aluminium, and copper, and is mostly used to provide a protective coating on, or to galvanise, steel. Silver is mined and produced mainly as a co-product of lead, zinc, copper and, to a lesser extent, gold. Currently, jewellery, followed by electronics and tableware are the most common uses of silver. Copper’s usefulness is well-known but today it is an essential material component of electric vehicles (EVs).

“What we’re finding from our drilling is it seems the resource is rich in copper at the top, but as it goes down deeper it becomes thicker and more rich in zinc”

As demand for these commodities continues to surge, so too will their value.

The global copper, nickel, lead, and zinc market is projected to grow from US$191 billion in 2021 to US$221 billion this year, at a compound annual growth rate (CAGR) of 15.7%. The value of these non-ferrous metals is collectively expected to rise to US$394.44 billion in 2026.

The main target at Belara is on the prospective trend for known Volcanic Associated Massive Sulphide (VAMS) mineralisation that was first mined at the Belara and Native Bee underground mines in the 1800s.

While the company’s main objective is to focus on exploration and development of the Belara Project, as well as its secondary Bullabulling Project tenements, it will pursue other potential acquisitions that have a strategic fit for the company.

This article is a sponsored feature from Mining.com.au partner Victory Goldfields Ltd. It is not financial advice. Talk to a registered financial expert before...
Read more
Special Feature

This article is a sponsored feature from Mining.com.au partner Prodigy Gold Ltd. It is not financial advice. Talk to a registered financial expert before...
Read more
Special Feature

Peako preparing to be a major PGE player

This article is a sponsored feature from Mining.com.au partner Peako Limited. It is not financial advice. Talk to a registered financial expert before making...
Read more