Aurelia Metals Limited (ASX: AMI) has announced a positive update on the ongoing exploration and Resource upgrade work at the Federation deposit, located ten kilometres south of the Company’s operating Hera Mine in New South Wales.

AMI noted that the new results support upside Resource potential in the lower-central portion of the Federation deposit. Aurelia said that the recent drill intercepts extend beyond the mineralised zone evaluated by the Federation Scoping Study.

The company announced that a third drill rig has been mobilised to the Federation area to expedite exploration and Resource conversion activities.

Broad, high-grade intervals of base metal and gold

The company said that substantial additional infill and extensional drilling was completed at the Federation deposit since the data cut-off for the February 2021 MRE. AMI announced that further broad, high-grade intervals of base metal and gold mineralisation were intercepted during Resource upgrade drilling.

All significant new results received for the Federation deposit are as shown below. 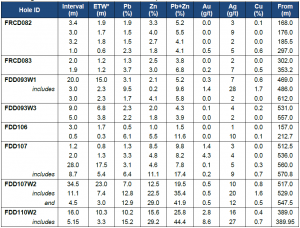 Aurelia noted that the broad, high-grade intercepts in FDD107, FDD107W2, and FDD110W2 all occur within the lower central portion of the deposit and support the presence of a second steeply plunging high grade mineralised corridor.

The company announced that further encouraging mineralisation was intercepted in step-out drilling along strike to the northeast.

Aurelia noted that the recent Resource upgrade and extensional drilling intercepts have extended the mineralised zone beyond that evaluated by the Federation Scoping Study, offering further upside for a potential mine development.

AMI said that the near-term drilling will also test the potential for additional steeply plunging high-grade zones in the sparsely explored lower and upper southwest portions of deposit.

The company announced that a third surface rig has been mobilised to the Federation site to expedite Resource infill and extensional drilling, along with evaluation of a number of highly prospective regional targets close to the Federation deposit.