Aston Minerals Limited (ASX: ASO) announced that veinlets of visible gold were intersected from the maiden drilling program at the Edleston Project in Ontario, Canada.

The company said that coarse visible gold as veinlets were intersected in diamond drilling at Edleston in the third drill hole from 362m. ASO said that the drilling intersected a broader 12m interval containing extensive quartz veining with pyrite-pyrrhotite and occasionally visible gold.

Aston said that it has expediated the core processing of interval, and assay results are expected in coming weeks.

The company said that the current drilling focused on an area 200m along strike to the east of the main body of mineralisation defined at Edleston. The effective strike length tested by drilling consists of only 1km out of a 10km of strike within the project.

ASO said that three diamond drill holes for 1,320 m has been completed to date and substantial alteration including quartz veining, pyrite-pyrrhotite were intersected in all three drill holes which appears to correlate well with projected target intervals.

The company had recently commenced its planned maiden diamond drilling program at Edleston project. The drilling comprised of total 15 holes for 5,000 m.

ASO said that the initial drilling aimed to extend and infill the Edleston Main mineralised trend, test the along strike extension of the high-grade hanging wall target, and then progress into regional targets.

Aston announced that a total of three diamond drill holes for 1,320m of drilling have been completed to date. The company said that the three drill holes (DDED21-001, DDED21-002, and DDED21-003) completed targeted mineralisation located approximately 200m along strike from the main body of Edleston mineralisation.

The company said that the second hole DDED21-002 collared into greenschist facies metamorphosed mafics, transitioning into gabbro, pyroxenite, and ended in peridotite.

Aston noted that the hole DDED21-003 was distinct from DDED21-001 and DDED21-002, exhibiting pronounced structural features interpreted as a fault damaged zone with heavily fractured, bleached, or chloritized mafic and felsic units.

The company said that the drill hole DDED21-003 intersected an intense zone of quartz veining with pyrite and pyrrhotite and occasional visible gold was intersected over a 12m interval. 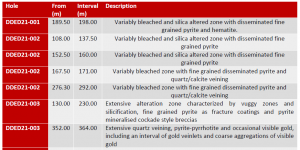 ASO announced that the 12m interval has been prioritised for core processing and will be sent for rush analysis. The company said that the results will be available in coming weeks.

Aston said that further refinement of subsequent drilling will be completed upon receipt of assay results and interpretation.

ASO Managing Director, Dale Ginn said: “The early success of the program through hitting visible gold veinlets in the third hole, 200m along strike to the east of the main Edleston body of mineralisation, provides us with a high degree of confidence of both the scale of the mineralisation and the methodology of targeting.

The mineralisation was directly targeted based on the IP chargeability anomalies. The effective strike length tested by drilling consists of only 1km out of a 10km of strike within the Project. We are looking forward to providing further updates as the drilling program unfolds.”