The company said that the RC and diamond drilling is ongoing at the Lake Rebecca Gold Project.

The company reported that assay results at Cleo continued to locate multiple mineralised zones surrounded by a significant halo of gold anomalism. The company said that the drilling showed excellent evidence of a strong mineralised cell that remains lightly explored to strike and depth, and warrants further drilling.

The company said that an immediate follow-up drilling will commence at Cleo to continue to build geological interpretation and expand known mineralised zones into untested areas.

AOP said that RCLR0809 and RCLR0811 were drilled as pre-collar holes and will be continued with diamond drill tails. The company said that diamond drilling will confirm the orientation of mineralised structures and is scheduled to start in the coming weeks.

The latest assay results included 27m @ 2.78g/t Au from 55m downhole in RCLR0801. The company said that this intercept, along with those reported in recent announcements, is expected to add more near-surface material at a higher grade than the pit constrained Rebecca MRE of 29.1 million tonnes at 1.2g/t Au for 1.105 million ounces1 of gold.

Significant assay results are as shown below: 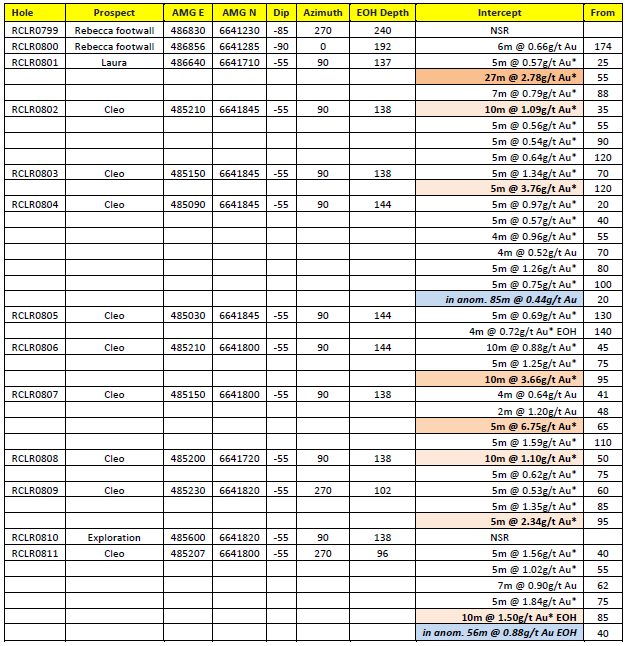 The company said that exploration drilling is continuing, with the current focus being targets that may provide additional near surface high-value mineralisation, including extensions of emerging footwall structures at the Rebecca deposit.

AOP said that infill and step-out RC drilling will continue at Cleo to bring this discovery toward Resource status, as well as resource definition drilling of unclassified and inferred in-pit Rebecca and Duchess mineralisation. The company announced that a series of compelling regional structural targets will also continue to be tested with initial exploratory drilling.

Apollo reported that diamond drilling is advancing well, with the second of six drill holes in progress

Apollo reported that diamond drilling is advancing well, with the second of six drill holes in progress. The current drilling is designed to deliver important resource definition data within the key mineralised structures at all deposits and provide material for ongoing metallurgical technical work.

The company said that the rig is currently at Rebecca, and will progress to Cleo, Duchess, and Duke as part of the technical work program. It will then begin testing a series of exciting open high-grade structural targets below the Rebecca deposit.

Apollo said that it has stepped-up technical evaluation work that is running separately and simultaneously to the exploration drilling activities. The company said that works have been commissioned to allow an engineering review of a range of options for the Project and then inform an appropriate mining study.

AOP said that hydrological, metallurgical, and permitting activities are underway, and environmental works will continue in the coming weeks.

The company said that it remains in an excellent financial position to continue the ongoing exploration and technical work at Lake Rebecca, with A$37.2M in consolidated cash as of 31 March 2021.

Apollo said that the next stage of exploration work will consist of follow-up RC pre-collars and diamond drilling to continue to scope lateral and plunge extensions of structures and to test new targets. The company said that additional surface geophysical surveys may be commissioned. AOP reported that a re-estimation of contained Mineral Resources will be carried out in due course.