Aeris Resources Limited (ASX: AIS) has announced that it has intersected a 60m thick sulphide interval from 140m down hole during exploration activities at the Constellation deposit within the company’s Tritton tenement package in New South Wales.

Aeris said that the diamond drilling continues to expand the down plunge and along strike extents of the mineralised system associated with the larger/deeper Moving Loop EM (MLTEM) plate. Assay results included 1.75m @ 8.54% Cu, 5.62g/t Au, 21.9g/t Ag (from 346.85m).

AIS said that all of the five new diamond holes (TAKD015 – TAKD019) intersected the sulphide horizon, with assays pending.

The company noted that DHEM surveying has defined a second EM conductor at depth, beneath the known mineralised system. AIS said that application was made for further 40 RC drill holes to further define potential near surface mineralisation.

The company had recently commenced drilling programs and Downhole electromagnetic (DHEM) surveying at the Constellation deposit.

The company reported that the RC drill program is well advanced with 43 of the 60 holes approved having been drilled to date.

AIS said that the RC drilling to date has intersected oxide (malachite & azurite), supergene (chalcocite), native copper and primary (chalcopyrite) copper mineralisation from 5m below surface, over a 120m strike length, to approximately 130m below surface. The company said that the lateral extents of the chalcocite +/- chalcopyrite horizon are significantly greater than anticipated, compared to the small footprint from the modelled EM splates.

Aeris said that of the 43 RC holes completed to date, 35 have intersected various forms of copper mineralisation, with assays pending.

AIS reported that diamond drilling at the Constellation deposit has continued to focus on testing the larger MLTEM plate. Of the 19 drill holes completed to date, 17 have targeted this MLTEM plate.

The summary of diamond drill holes completed at the Constellation deposit is as shown below. 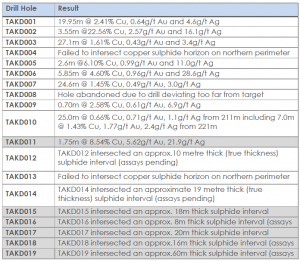 The company said that Downhole EM Surveying detected a new EM conductor at depth beneath the known sulphide body at Constellation.

The company noted that drilling to date has not intersected this modelled EM conductor, although TAKD015 intersected a 50cm thick pyrite and pyrrhotite rich massive sulphide lens at the interpreted target depth, 60m south from the modelled plate.

The company said that drilling will continue at the Constellation deposit with all three drill rigs operating for a majority of the remaining FY21 period.

Aeris’ Executive Chairman, Andre Labuschagne, said: “Constellation continues to provide exciting results from both the drilling program and the DHEM surveying. The 60m sulphide intersection in TAKD019 is particularly exciting, however further drilling is required to understand its significance in relation to the other drilling results, both up-and-down-dip from its location.

The RC drill program has surpassed our expectations. Intersecting oxide and supergene copper mineralisation from near surface to approximately 130m below surface, over a 120m long strike length, is a fantastic outcome.

The mineralised system has now been traced approximately 850m down plunge and between 120m to 150m along strike, from 5m below surface. The Constellation deposit is shaping up as a copper rich system with clear open pit opportunities.”