The company said that the high-grade copper mineralisation was thicker than expected within the oxide / supergene zones and remains open along strike to the south.

AIS announced that approval was received for an additional 19 RC holes to continue testing mineralisation along strike. The company said that it is awaiting approval for a further 21 RC holes.

The company had recently commenced an RC drill program at the Constellation deposit. The program was designed to test the extents of shallow oxide and supergene copper mineralisation first identified from diamond drill hole TAKD002.

AIS said that 52 RC drill holes have been completed to date, with assays received for 22 and assays pending on the remaining 30. The company said that between 10 to 15 RC drill holes intersected water at or within the mineralised horizon and were stopped. AIS said that work is currently underway to extend each hole via diamond drilling and once this work is completed the RC drill program will continue on new holes.

Aeris said that significant high grade copper intersections were reported from the RC drill program at the Constellation deposit.

Important results from the RC holes are as shown below. 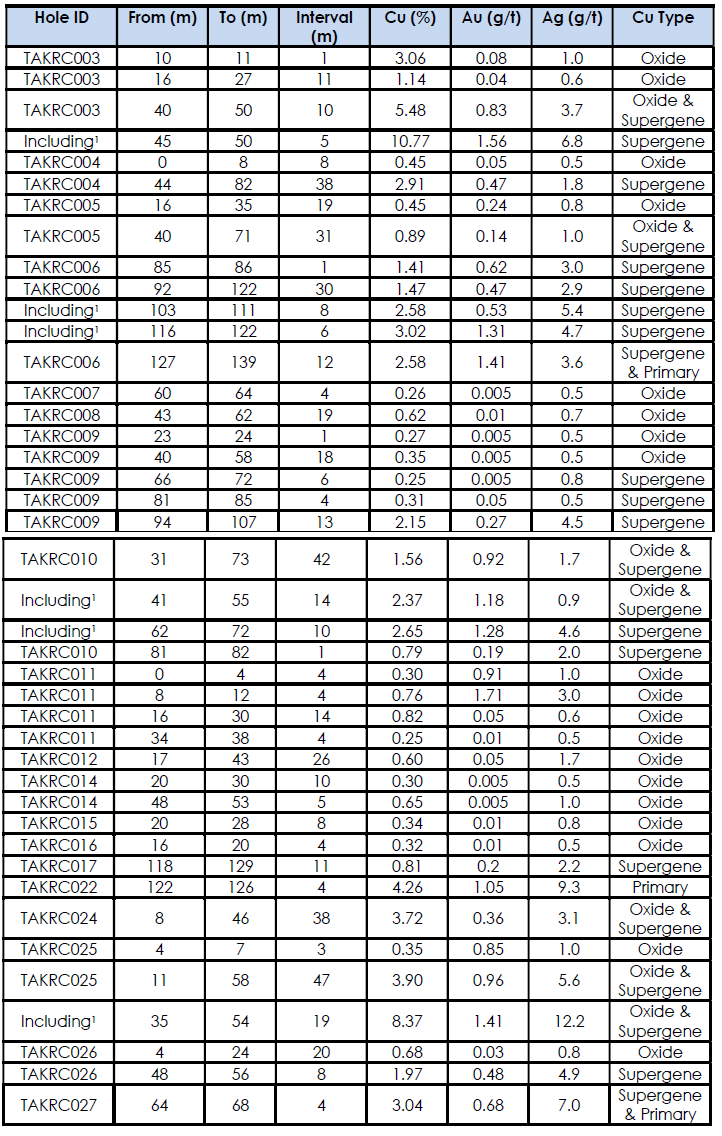 The company said that the RC drill program has now defined the oxide and supergene copper footprint approximately 150m along strike and 130m down plunge. Mineralisation remains open to the south.

The company said that the reported copper intersections were thicker than expected when compared to the initial visual estimates of copper minerals recorded from the RC chips. AIS said that surrounding most of the logged chalcocite lenses were broader zones of disseminated sulphides also containing copper minerals. The company noted that the proportion of copper minerals within the disseminated sulphides were greater than initial visual estimates and account for the increased reportable thicknesses.

AIS said that a copper oxide horizon, forming sub-horizontal “blankets” from 5m to 40m below surface, was shown to be associated with lower grade copper mineralisation. The company said that the copper assays within this oxide horizon were generally less than 1%, with localized zones of higher-grade copper, as reported in drill holes TAKRC024 and TAKRC025.

Aeris said that higher-grade copper mineralisation was primarily associated with the supergene copper horizon beneath the oxide horizon(s). AIS said that the main copper mineral within the supergene zone, chalcocite, was traced approximately 150m along strike and down to 130m below surface. The supergene horizon seems to be best developed along the mineralised structure, dipping moderately southeast and trending northeast-southwest.

The company said that native copper was observed in some RC holes.

The company said that two applications to the NSW Resources Regulator have been submitted for an additional 40 RC holes in the adjoining two exploration tenements. The application to complete 19 RC holes in EL8084 has been approved.

AIS said that samples through the mineralised zones will undergo more sophisticated analytical techniques to quantify the proportion of oxide, supergene, primary, and native copper within.

The company said that drilling will continue at the Constellation deposit with all three drill rigs operating for a majority of the remaining FY21 period.

Aeris’ Executive Chairman, Andre Labuschagne, said: “The first round of assay results from the RC drilling have exceeded our expectations. Intersecting high grade copper mineralisation within 10m from surface is remarkable.

The footprint of this near-surface copper mineralisation is also larger than we expected and remains open along strike to the south.”