Peak assays included 3.21g/t Au + 1.89% Cu and 0.36g/t Au + 1.42% Cu. The company said that the rock chip sampling resulted in the discovery of new mineralised veins and the extension of previously-known quartz-haematite veins.

ICG said that copper-dominant mineralisation is now observed over a 1.25km-wide zone that remains open in all directions. The company said that a project-wide 30,000 line kilometre Airborne Magnetic-Radiometric (AMAGRAD) survey has been scheduled for September.

The company also announced an important update from Riqueza regarding the commencement of the NE Area drilling program, and success in its Co-funding grants for exploration in the Northern Territory.

ICG reported that high-grade gold and copper results were returned from the assay results from recent rock chip sampling.

Rock chip sample location and important assay results are as shown below. 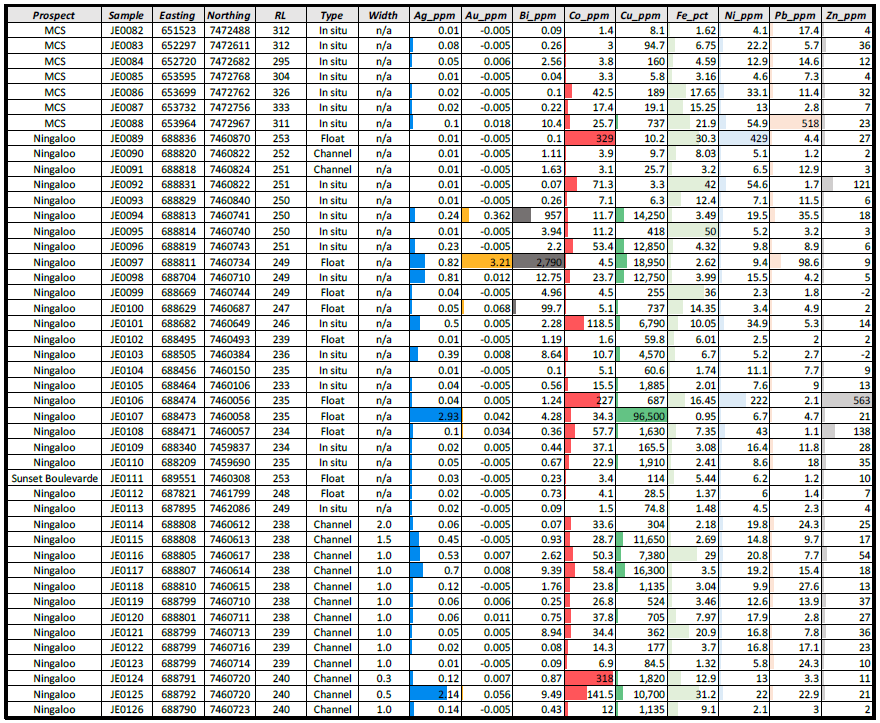 The company said that these samples, together with assays from JE0096 (1.28% Cu), form the newly discovered extension of the V2 vein and lie 25-40m NE of the previously-reported KV vein.

ICG noted that mineralisation at V2 comprises three sub-cropping quartz-iron (Qtz-Fe) veins over a 16m-wide zone, with Cu enrichment noted to extend beyond the veins and into the altered granite host rock.

Inca Minerals said that the in-situ Cu enriched structures are now known to occur over a 1.25km wide zone.

Inca announced that it has scheduled a 30,000 line km AMAGRAD survey to commence in September

Inca announced that it has scheduled a 30,000 line km AMAGRAD survey to commence in September. Results of this survey will be used to refine targets to determine requirements for follow up exploration. The company noted that given the widespread but thin sand cover lying over much of the Project area, it is considered likely that future exploration may identify additional areas of interest.

The company reported that it was successful in its two application of government co-funding in the Northern Territory. Co-funding was awarded for the Company’s Frewena Group AMAGRAD survey and for Jean Elson’s AMAGRAD survey.

The company said that at Riqueza, the delays in the permitting regime due broadly to persistent logistical problems associated with COVID-19 travel and work restrictions were overcome to allow the Company to commence drilling.