Other Life of Mine (LOM) approximate financial metrics included LOM revenue of A$3,600M; LOM EBITDA of A$2,340M; Cashflows (pre-tax) for LOM of A$2,222M; assumed funding of 50% equity and 50% project finance; and initial payback period of 12 months from commencement of production.

In the scoping study, Suvo envisions White Cloud to have 25 years LOM on current Indicated Resources of 26.9Mt of bright white kaolinised granite <50% of the resource total. The hydrous processing plant is estimated to have an initial processing capacity of 500,000tpa producing 200,000tpa of refined kaolin products, with estimated capital costs including pre-production costs of A$68M and all in Sustaining Cost (AISC) of A$256/t with an anticipated selling price of A$720/t (ex-works).

White Cloud project about 210km northeast of Perth currently has an overall resource of 72.5Mt, of which 26.9Mt is classified as Indicated and 45.6Mt as Inferred.

Kaolin is a feedstock for high purity alumina (HPA), a component of lithium-ion batteries and LED lights. It also has a wide range of other industrial uses, like paper and paperboard, fiberglass, ceramics, and paint.

The company has now delivered a robust Scoping Study demonstrating the potential to develop a multi-decade mine at the 100% owned White Cloud Kaolin Project. SUV said that the scoping study was based on the higher confidence indicated resource of 29.9Mt.

The summary of key physical and financial statistics associated with the Scoping Study is as shown below. 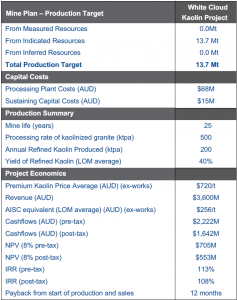 SUV said that the project is anticipated to create approximately 80-90 jobs once the plant is fully operational with most employees to be sourced locally.

The company said that initial target export markets would include the high-quality paper coating, paint, pharmaceutical, catalysts, and ceramics industries.

Suvo said that an MOU has already been signed with one of the largest manufacturers of ceramic products, LIXIL ASTJ, who are actively assisting Suvo in developing tailor-made refined kaolin products for their global manufacturing plants.

SUV said that due to the robust economics derived from the Scoping Study, the company will proceed to commission a Pre-Feasibility Study and, concurrently, will undertake mining and environmental studies to lead towards the application of a mining licence.

Suvo said that local stakeholders’ engagement has already commenced with the project receiving strong support from the local shire council. The company said that the services to the project site, including water and power, will also be better defined and the results incorporated into the Pre-Feasibility Study.

“it is our intention to turn our White Cloud project into a world class, high quality, kaolin mining and processing operation”

Suvo Executive Chairman, Robert Martin, said: “We are extremely pleased to present this Scoping Study to the market and to our shareholders as it is our intention to turn our White Cloud project into a world class, high quality, kaolin mining and processing operation capable of producing 200,000 tonnes per annum of product. The Study clearly demonstrates we are on the right pathway to achieve this.

The exceptionally strong project economics show an initial pre-tax NPV of A$705 million, an IRR of 113% with LOM revenue of A$3.6B and LOM EBITDA of A$2.34B. These numbers confirm our immediate obligations to commence a Pre-Feasibility Study that will allow us to make a final investment decision on a long life mining operation capable of delivering strong shareholder returns.”