The company said that 4,190m were drilled to date and further assay results are expected in April and May. RIE said that the drilling is underway on the final 10 holes, with the program due for completion in early April.

The company had recently commenced its maiden drill program at the Kingman Project targeting areas of historic gold and silver mineralisation where high grades of gold and silver were mined in the late 1800s and early 1900s and where diamond drilling in late 2019 intersected multiple high-grade veins.

The company said that drilling contractor Boart-Longyear has completed 49 holes for 4,190m. The rig recently completed 12 holes at the Jim’s Shaft area – which Riedel believes to potentially be a base- metals-rich target located approximately 1.5km south-east along strike from Tintic – and has moved back to the northern section of Riedel’s large project area to complete the remaining holes in the drill program.

Significant intervals are as shown below. 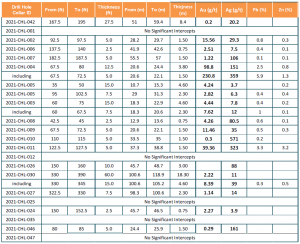 Riedel announced that it anticipates completion of drilling in early April 2021, with further drill assay results scheduled to be received and released during April and May.

The company said that follow up RC drilling is planned to expand the current understanding of mineralized structures. RIE said that drill hole locations will be selected to test for mineralization along strike and at depth.

Riedel Chairman Michael Bohm said: “We are very excited with these multiple high-grade gold and silver assay results achieved at our Kingman Project in Arizona. It is important to reiterate that our large project area – which was mined historically for gold, silver, zinc and lead – has had very little modern exploration applied to it. Apart from limited drilling in the 1980s and 1990s, which we believe was restricted to a very small footprint, the project area had never seen a drill hole until late 2019 and now our own program in 2021

We are seeing in the recent drilling what appears to be mineralised widths broader than that seen in the successful 2019 drilling and which supports our belief that the multiple areas of mineralisation pinch and swell – as one might expect – and have significant strike and depth potential. We believe these high-grade gold and silver results, seen both near surface and at depth, speak to the potential of the project area from both an open pit and underground mining perspective.

Drill hole assay results will continue to arrive in April and May and I look forward to announcing those in due course.”