Predictive Discovery Limited (ASX: PDI) has announced outstanding results up to 6m @ 32.0g/t Au from 4m from the company’s first program of power auger drilling and rock chip sampling at the Koundian Project, part of its extensive Guinea landholdings.

The company has recently commenced a series of three reconnaissance exploration programs to explore the Koundian JV Project permits for gold mineralisation. This included a regional aeromagnetic survey program, a large power auger program, and geological mapping and sampling.

As part of the regional aeromagnetic survey program, the Company flew a 1,282 line-km geophysical survey at Koundian covering an area of approximately 128km2. Geological mapping and sampling were carried out, with 530 rock samples collected across the permits. The large power auger program was undertaken to test targets defined by the aeromagnetic survey and geological mapping plus some other areas of extensive artisanal gold workings.

PDI has now reported outstanding results from its first program of power auger drilling and rock chip sampling at Koundian.

Detailed results and a complete explanation of the methods followed in drilling and assaying the reported holes are shown below. 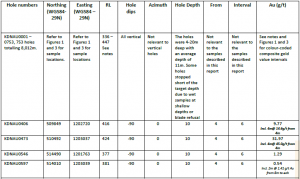 PDI said that both the power auger drilling and rock chip results confirm the presence of widespread high-grade gold values on the project area.

Predictive reported that the helicopter-borne magnetic and radiometric survey was conducted by New Resolution Geophysics (NRG™) in February covering two of the four Koundian permits on a 100m-line spacing.

The company said that the geophysical data was processed and an initial geological interpretation and target generation program has been carried out.

PDI announced that the images of processed aeromagnetic data show structural features that may have controlled the localisation of the known gold mineralisation. Of particular note are a series of NE-oriented features, the strongest pair of which form a corridor that includes the highest-grade power auger drill results recorded to date.

The company said that the power auger drilling program is now complete for the current field season. PSI reported that once all results are received and subject to access during the upcoming rainy season, the Company will undertake closer spaced, low-cost auger drilling programs to more closely define the anomalous areas in preparation for deeper drilling later in the year.

Predictive Discovery MD Paul Roberts said: “By any measure this is an excellent start to exploration results from Koundian. The huge extent of mapped artisanal workings on the new ground shows that gold mineralisation covers a large area in a geological setting analogous to the nearby known gold deposits, with the Company well-funded to continue regional auger programs on its Siguiri Basin projects.”