The company had commenced Riverina South infill drilling to allow the “inferred” mineral resource of 650,000 tonnes @ 2.1g/t for 43,000 ounces to be upgraded to “indicated” category.

Meanwhile, the Riverina Underground drilling was aimed to allow the upgrading and the potential extension of the current Riverina underground mineral resource of 728,000 tonnes @ 5.9g/t for 139,000 ounces.

The company said that the Riverina South drilling program targeted a 1km long, highly prospective strike extension corridor immediately south of the main Riverina mining area. OBM said that open pit mining commenced here in Oct 2020 with the mine now providing the bulk of the mill feed to the Davyhurst 1.2Mtpa process plant. The Riverina open pit mine has a declared Ore Reserve of 1.4Mt @ 1.8g/t for 81,000 ounces.

OBM said that the current 10,600 metre Phase 3 program followed on from the Phase 1 exploration RC program (32 drill holes for 3,639 metres) completed in early 2020, and Phase 2 RC program (68 holes for 7,338 metres) which had resulted in the declaration of the maiden Mineral Resource.

OBM’s Riverina Underground drilling comprised an RC and Diamond drill program targeting Main lodes which were mined from underground historically. The company said that the drill program (14 holes for 3,270m) aimed to increase resource classification and extend the resource down plunge to the south. Main lodes are two sub-parallel, sub-vertical mineralised shears with significant strike (>1000m) and depth (>250m) extent.

All significant intersections are as shown below. 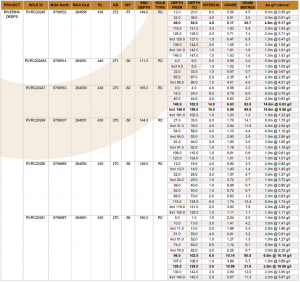 All significant intersections are as shown below. 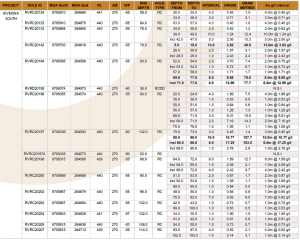 Ora Banda Managing Director, David Quinlivan, said: “These results continue to provide a solid basis for significant open pit and underground mineral resource upgrades at Riverina South. We accordingly have increased confidence that Riverina South has the potential to deliver both a substantial extension to current open pit mining operations and a new underground mining operation at Riverina. Numerous highly prospective areas remain to be tested at Riverina and we look forward to the ongoing exploration efforts at Riverina delivering exciting results into the future.”