MGV said that the assays from further follow-up drilling within the new gold corridor identified west of Lena linking targets 5, 14, and 20 are expected in early April.

The company reported that the diamond drilling of regolith gold anomalies on Lake Austin is ongoing within the Evolution JV and an additional RC drill rig is due on site in early April to fast-track exploration and resource definition.

The company said that encouraging assay results were received for all completed holes.

Musgrave said that the mineralisation at White Heat has now been intersected over a strike extent of up to 100m with drilling at depth and along strike continuing.

The summary of the new RC drill hole assay intersections from the White Heat prospect is as shown below. 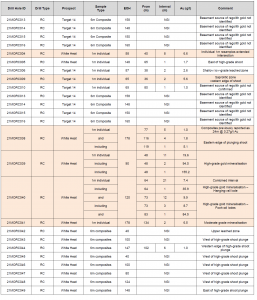 The company reported the ongoing and upcoming activities at Musgrave 100% tenements as well as Evolution JV. MGV said that a range of exploration techniques will be considered to progress exploration including additional surface sampling and drilling.

MGV said that at its 100% tenements, the first phase of RC drilling at the White Heat target is now complete to approximately 125m vertical depth. Further drilling will commence in two weeks.

The company said that follow-up aircore drilling is underway to define the strike extent of gold anomalism within the new gold corridor identified west of Lena and assays are expected in mid-April.

Musgrave said that an additional RC drill rig has been sourced and will commence in two weeks. The company said that this drilling will focus on defining the basement source of gold anomalism at Targets 5, 14, and 20 and is scheduled to commence in early April.

The company reported that the works for the prefeasibility study at Break of Day and Lena are underway with a focus on long lead-time items.

MGV said that the diamond drilling to follow-up the extensive regolith gold anomalies identified in the regional aircore drilling program on Lake Austin has commenced.

Musgrave Managing Director Rob Waugh said: “These high-grade, near surface gold results from White Heat further highlight the discovery potential of the project. Exploration is continuing to deliver strong results and add value for our shareholders.

Drilling will resume at White Heat in a few weeks as we continue to define the limits and plunge of the mineralisation. At a regional level, we are continuing to drill to better define the new gold corridor 800m west of Lena that is continuing to produce high-grade gold results in previously undrilled areas. Consistent newsflow from these activities can be expected over coming months.”