Standout results from the 4 DD holes are shown below. 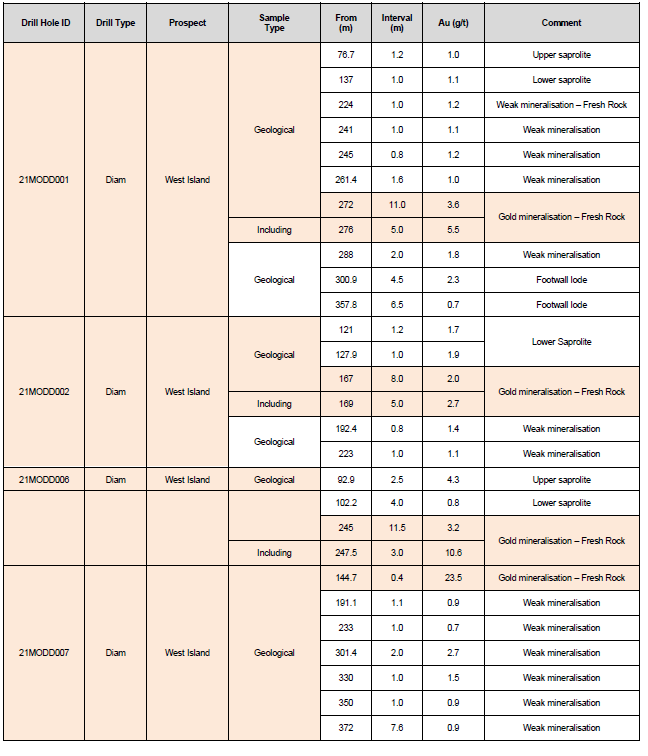 The Cue project is located in the Murchison District of Western Australia.

In late 2019, Musgrave entered into an earn-in and joint venture exploration agreement with Evolution Mining over a select area of Lake Austin and surrounds on the Cue Project. Evolution stands to earn a 75% interest in the JV area by sole funding A$18 million in exploration costs over a five-year term. To date, Evolution has spent $4.6 million.

The Evolution JV excludes all current resources at Cue (including the Lena and Break of Day deposits), the new White Heat and Big Sky discoveries, and the Mainland option area.

Under the Evolution Joint Venture, two phases of regional AC drilling were completed on Lake Austin, comprising 436 holes for 48,895m.

The AC drilling defined basement targets for a focused 2,720m, 7-hole diamond drilling program which was completed in May 2021 and tested two regional gold targets – West Island and Austin North.

At the Evolution JV area, MGV is currently integrating the results with existing datasets to define final targets for the new diamond drilling program scheduled to commence in early July. Further AC drilling is scheduled for late July. The company is considering a range of exploration techniques to progress exploration including additional drilling.

Musgrave Managing Director Rob Waugh said: “This is a great early result from diamond drilling and a strong endorsement of the joint venture program on Lake Austin. We are looking forward to the re-commencement of diamond drilling in July to further test the extent and grade of the gold system at West Island. Evolution’s ongoing commitment is a strong affirmation of the upside potential of the project.”