Los Cerros Limited (ASX: LCL) announced that the assay results from an additional three drill holes recently completed at the Tesorito Prospect within the Quinchia Project in Colombia have continued to expand gold envelopes.

The company had recently completed an additional three drill holes at Tesorito Prospect in Colombia – TS-DH17, TS-DH20, and TS-DH21, where drilling is currently ongoing. Drill holes TS-DH20 and TS-DH21 were intended to test the northerly extent of the higher grade envelopes.

LCL reported that TS-DH17 delivered mineralisation in the first 232m consistent with the modelled geometry of Tesorito South porphyry, intercepting the higher-grade zone at 72m as expected, and expanding the +1g/t Au envelope southward.

The company said that the holes TS-DH20 and TS-DH21 reported significant widths of higher grade at targeted depths and as such, higher grade mineralisation has been extended and remains open to the NW, N, and NE in the direction of the Tesorito North porphyry target ~275m NNE of TS-DH20 drill pad.

Tesorito diamond drill hole intercepts of note are as shown below. 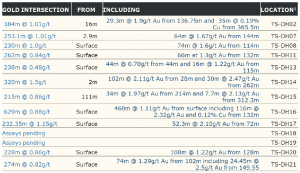 The company said that with the expansion of the surface expression of modelled gold envelopes, the Tesorito South porphyry has taken on a more circular form, which is a common shape amongst porphyry systems.

LCL also noted that the top surface of the higher grade (>~1.3g/t) envelope shows consistency throughout the mineralised zone with most holes intercepting the higher grade zone between 110m and 140m downhole.

LCL said that additional drilling is required to systematically test the nature and extent of mineralisation. The company said that the objective of the Tesorito drill program is to test two anomalous zones, the southern and northern Tesorito targets.

Los Cerros Managing Director, Jason Stirbinskis said: “The program of holes – TS-DH15, ’16, ‘17, ‘20, ‘21 and other more recent holes with results pending, were all intended to define the limits of Tesorito South porphyry mineralisation. However, all assay results thus far have reported significant widths of both lower and higher-grade gold and so the area of interest keeps getting bigger in the directions we’ve recently tested.