Golden Mile Resources (ASX: G88) announced that a wide zone of high-grade gold mineralisation including 33m @ 1.60g/t Au from 48m including 16m at 2.95g/t Au from 61m were intersected from the aircore drilling at the Wanghi Prospect, part of Benalla Project within the company’s Leonora Gold Project in Western Australia.

The company noted that drill hole BTAC187 was the first of six holes the Company has received assays for from the 2021 program with more than 3,000m drilled to date.

G88 noted that the mapping at Wanghi had identified a previously unrecognised structural trend controlling gold mineralisation which has been lightly tested by the current drilling program. The company said that the newly identified structural zone presents an exciting new target for testing with RC drilling planned to commence mid-late next month.

Golden Mile said that re-assay of 1m splits of significant intersections from the 2020 aircore program returned a high-grade intersection in BTAC082 with 1m @ 10.60g/t Au from 30m.

In late February, the company had commenced aircore drilling at the Wanghi Prospect, within the Benalla Project. Benalla is part of the Company’s Leonora Gold Project located ~230km north of Kalgoorlie, Western Australia.

The company said that to date, it has drilled a total of 3,000m of AC drilling in 81 holes of an approximately 3,500m program planned across the Benalla Project with a further 3-4 days of drilling remaining.

The company said that it had placed a ‘rush’ order on six holes (BTAC184-189) which were drilled to test the Wanghi Prospect defined by the wide, high-grade zone of gold mineralisation intersected in BTAC082.

G88 announced that the aircore drilling at the Wanghi Prospect within the Benalla Project has intersected a wide zone of high-grade gold mineralisation.

G88 said that it currently has more than 1,000 samples at the laboratory in Perth with results anticipated in the coming weeks.

G88 also announced the results from the resampling of significant intersections from the 2020 program. The original results were reported from four metre composites which were resampled on one metre intervals to examine the potential for high-grade zones, as well as any bias introduced by the presence of coarse ‘nuggety’ gold.

The company said that the results confirm the original intersections and include several previously unrecognised high-grade zones including 4m @3.86 g/t Au from 28m in hole BTAC082.

Golden Mile said that this intersection highlights the potential of the mineralised system at Wanghi to host higher-grade zones of mineralisation which will be tested with deeper drilling. 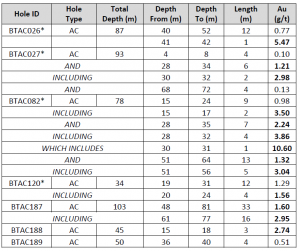 The company announced that the geological mapping by the Company’s geologists at Wanghi identified a previously unrecognised structural trend controlling gold mineralisation in the area.

G88 said that the structural zone dips steeply toward the northwest, which is oblique to the direction of drilling completed to date at Wanghi where the holes were drilled towards the southwest, perpendicular to geochemical anomalies.

Golden Mile said that this oblique relationship explains the patchy gold intersected in lines to the north and south of the mineralised intersections in holes BTAC082 and BTAC187 and will be used to better plan future drill holes to test the Wanghi mineralised system.

Golden Mile said that a reverse circulation (RC) drilling program is now planned to commence after the Easter break to test the newly identified structural zone at Wanghi as well as several other prospects at Benalla including any defined by upcoming results from the current AC program.

The company said that the infill and extensional drilling to test for lateral and depth extension may also be undertaken.

Golden Mile’s Managing Director James Merrillees said: “These are exciting results for the Company. We intersected further wide zones of strong gold mineralisation in fresh rock at Wanghi, and the recognition of important structures controlling mineralisation provides an important new targeting tool for the follow up RC drilling planned next month.

The plus 10-gram gold intersection in hole BTAC082 at Wanghi also points to the potential for high-grade in the system and is further endorsement of our belief in Benalla to host a meaningful gold system immediately along strike from KIN Mining’s 1.15Moz Cardinia Gold Project.

With assay results received for only six out of a total of 81 holes drilled to date we are looking forward to a period of strong news flow over the coming months.”