The company noted that the contact shows very similar geology to that encountered at the Oracle Ridge mine which hosts the existing JORC Resource.

EM2 said that the prospectivity for additional skarn-hosted copper mineralisation at OREX has been significantly enhanced. The company announced that a detailed aeromagnetic geophysical survey of the OREX prospect is in progress to determine drill targets and assess the mineralisation potential of the lower contact.

The company had commenced a detailed mapping project at the OREX prospect, part of the Company’s 80% owned Oracle Ridge Mine Project in Arizona based on encouraging results from an initial field mapping program at OREX in 2020.

EM2 said that the detailed mapping project has now been completed. The company said that the field mapping at OREX prospect identified extensive outcropping mineralisation along the lower Leatherwood intrusive contact, approximately three kilometres from the Oracle Ridge mine portals.

Eagle mountain said that the field mapping confirmed the extensive occurrences of outcropping skarn hosted copper-silver-gold mineralisation along the lower contact of the Leatherwood intrusive and the skarn horizon.

The company reported that over 100 grab samples were collected with many returning high-grade mineralisation. Em2 said that high-grade copper was identified from the assay results from rock chip samples at OREX prospect.

Summary of Cu > 1% assay results from rock chip samples at OREX prospect is as shown below. 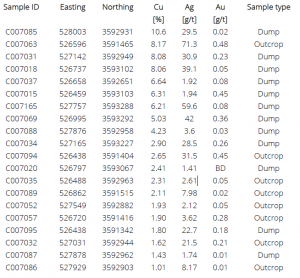 The company announced that the results of this latest field work indicate that OREX is an outstanding target to define additional skarn-hosted copper mineralisation at Oracle Ridge.

The company said that the lower contact at OREX can be traced at surface for over four kilometres and displays discontinuous skarn alteration and mineralisation over its entire length.

EM2 said that based on the company’s recent mapping and review of historical drilling information, it believes that the prospective contact exists at depth below the Leatherwood for approximately three kilometres in an east-west direction.

Eagle Mountain said that a drone aeromagnetic geophysical survey is currently being completed over the OREX prospect. The survey will highlight areas with high magnetite content, a mineral often associated with mineralisation at Oracle Ridge.

EM2 said that after the survey, further geophysical processing of the data will be completed to establish the depth of the anomalies. Drill holes will then be planned to test these anomalies in the coming months, and drilling will commence once necessary permits are received.

The company said that the follow-up exploration at OREX would include refinement of the existing geological model based on the new data collected during mapping; and drilling of targets displaying the most favourable geological, geochemical and geophysical characteristics once all relevant permits have been obtained.

Eagle Mountain Mining CEO, Tim Mason said: “These results illustrate the prospectivity of the OREX prospect which covers an area greater than at the Oracle Ridge mine. This is truly exciting.

Following an initial geological review in 2020, we staked a significant package of prospective land to the south-east of the Oracle Ridge mine now known as OREX. This latest field program on OREX concluded that the lower contact of the Leatherwood granitic intrusive has abundant outcropping copper skarn.

Our interpretation is that the limestone units which host the mineralised skarn were intruded by the Leatherwood granite, therefore the bottom of the Leatherwood at OREX is highly prospective for further mineralisation. We have commenced a detailed drone aeromagnetic geophysical survey over OREX to assist us in defining priority drill targets.”