Auteco Minerals Ltd (ASX: AUT) has announced that it has made a significant discovery named Carey at Pickle Crow project in Canada, with shallow high-grade intersections including 20.4m @ 5.3 g/t gold from 102.7m. The company said that the shallow broad zones of mineralisation highlight the potential for open pit mining.

AUT said that in addition to the Carey discovery, drilling has extended the known high-grade gold mineralisation in the Shaft 3 and Shaft 1 areas. These results included 4.9m @ 7.5g/t gold from 483.2m; 1.3m @ 21.4g/t gold from 82.1m; and 0.6m @ 42.9g/t gold from 320m. The company said that the latest underground Shaft 3 drilling results will be included in next month’s update to the existing Pickle Crow Inferred Resource.

The company reported that the 45,000m drill program has now been completed and an additional 50,000m drill campaign has been approved by the Auteco Board and will start immediately. Auteco said that is fully funded for its growth strategy, with $26.8M cash on hand.

The company had commenced a 45,000m Resource definition and exploration program in September 2020 at the Pickle Crow gold project in Canada.

AUT said that the drilling phases of the work program have been completed, with a total of 166 diamond holes drilled for 45,522m. Results are yet to be returned for 28 holes. The company said that all drilling completed between September 2020 and June 2021 was conducted outside of the Inferred 1Moz Resource at 11.3g/t gold.

AuTECO strategic work plan, key work phases, and progress to date are as shown below.

The company has now reported encouraging exploration results from Pickle Crow, which have been grouped based on proximity to the three main shafts – Shaft 1, Shaft 3, and Albany.

The Carey prospect was a conceptual target zone focused on an area of structural disruption adjacent to the contacts between multi-generational porphyritic intrusions and the host rock, which includes mafic volcanics and banded iron formation (BIF). The company said that the drilling completed since April 2021 has confirmed several bulk tonnage targets centred around high grade gold veins proximal to the Albany Porphyry and later stage quartz-feldspar porphyries.

The company reported that high-grade intersections were returned from first pass target testing at Carey discovery.

AUT said that the results highlight the potential for open pit mining in addition to what was historically a narrow-vein underground operation at Pickle Crow.

The company said that the mineralisation remains open in all directions on targeted structures, and work will now focus on defining continuity within the mineralised envelopes.

AUT said that the review of historic drilling in the greater Carey-Albany area demonstrated that broad shallow mineralisation has been previously encountered. The company said that exploration drilling is planned to confirm historic results and test the open pit potential of the Carey-Albany area.

The company said that the exploration drilling in the Shaft 3 area has intersected a previously undiscovered shear vein in hole AUDD0152 within the Pickle Crow assemblage. The assayed intersection for this hole was 4.9m @ 7.5 g/t gold from 483.2m in hole AUDD0152.

AUT said that the step-out drilling in the Shaft 3 area also returned intersections that demonstrated the continuation of known veins beyond the current known extents.

Highlights delivered to date from the Auteco strategic work program that demonstrate the organic growth potential of Pickle Crow are as shown below. 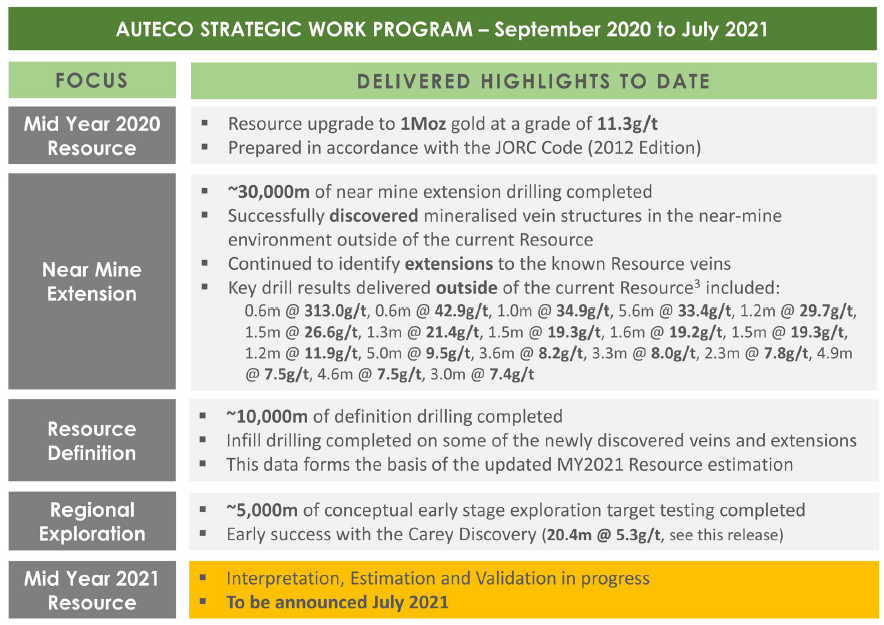 The company said that the newly identified target zones represent compelling targets that will undergo preliminary drill testing by Auteco in coming months.

The company said that data from the drilling acquired between September 2020 and June 2021 has been compiled and validated and geological interpretation, domaining, and wireframing of the mineralised zones is in progress. Auteco said that the updated estimate is scheduled for completion in early to mid-July 2021 with results released immediately thereafter.

AUT announced that an additional 50,000m drill campaign has been approved by the Auteco Board and will start immediately. Auteco reported that it is fully funded for its growth strategy, with $26.8M cash on hand on March 31 2021.

Auteco Executive Chairman Ray Shorrocks said: “The latest drilling program has been a huge success and we will further capitalise on this success with additional drilling.

The high grades and the substantial widths of the new mineralisation highlight the potential for highly beneficial bulk mining methods to be used, either as wider stopes in an underground setting or as an open pit.

We will now complete the Resource update in parallel with starting the new drilling program, ensuring we maximise the opportunity to generate newsflow and create value for shareholders.”