Aurelia Metals Limited (ASX: AMI) has announced high-grade gold mineralisation including 36.53 metres at 5.4g/t Au, including 5.53 metres at 9.6g/t Au from the Resource upgrade and extensional drilling campaign at its newly acquired Dargues Mine near Braidwood, New South Wales.

The company announced that the results highlight significant potential Resource upside at Dargues.

AMI said that the extensional drilling is currently underway with two surface drill rigs operating at the site.

The company had initiated an underground infill drilling program immediately after the Dargues acquisition to increase confidence in the existing MRE and Ore Reserve Estimate.

AMI said that the lower portion of Plum’s Lode at the eastern extent of the underground mine was the first target area, returning significant intercepts. The company said that the infill drilling around active development levels on the Main and Bonanza lodes has also returned highly encouraging intercepts.

Aurelia announced that significant intercepts were reported from Plum’s Lode, and Main and Bonanza lodes within the Dargues Mine.

Significant intersections for the drill holes are as shown below. 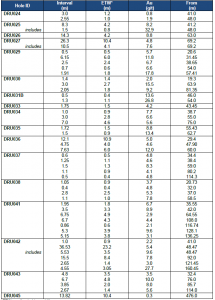 The Company announced said that it has identified significant exploration upside potential at Dargues with the existing Mineral Resource Estimate constrained by a lack of drilling information.

Aurelia announced that underground infill drilling is continuing in the Main and Bonanza Lodes, aimed at upgrading confidence in areas of the MRE that have lower density drilling.

The company said that two surface rigs recently commenced drilling. One rig is targeting deeper mineralisation directly below Plum’s Lode, while the second surface diamond rig is testing for extensions to Main Lode at depth and along strike to the east.