Alliance Resources Ltd (ASX: AGS) announced that the assay results for the latest RC drilling campaign completed at the Weednanna Au-Fe Deposit in the Eyre Peninsula, South Australia identified extensions to high-grade gold in Shoots 7 and 8.

AGS said that there is potential to increase the size of Shoots 7 and 8 with further drilling.

Shoot 8 is hosted within calc-silicate near the footwall contact with granite and gneiss, immediately to the west and south of Shoot 7.

The company had drilled 19 RC holes for 3,098 metres at Shoots 7 and 8 at the Weednanna Au-Fe Deposit deposit during November and December 2020 to define the limits of gold in the central area of the deposit.

AGS has now reported the results from the latest drilling program.

Alliance Resources announced that the results from the drilling program have confirmed extensions to high-grade gold at Shoots 7 and 8 that is expected to increase the Indicated gold resource. AGS said that the gold at both shoots remains unconstrained by drilling in at least one direction.

The company said that most of the gold is located within 200m of surface in the southern half of the deposit and has been defined to Measured or Indicated resource category. AGS said that the high-grade gold intersected at Shoots 7 and 8 remains open with further drilling planned to define their extent.

Weednanna Gold Intercepts >1 g/t Au are as shown below. 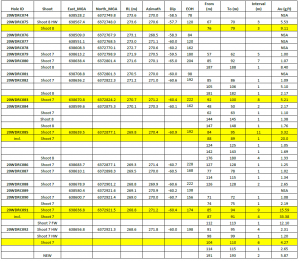 Alliance said that it is completing feasibility level assessment into the commercial viability of establishing a 250,000 tonne per annum CIL gold producing operation at Weednanna using the 2020MRE.

The company said that the metallurgical test work is complete and the detailed engineering design of the gold processing facility has commenced. AGS said that the mine design and cost analysis work is progressing, as are various other studies and agreements required to support the submission of a mining lease application and mining proposal. Alliance said that it is working towards submitting its application for a mining lease in Q3 2021.

AGS reported that further drilling is planned at Weednanna in H2 2021 to increase the size and upgrade Inferred resources to the Indicated category in the northern area of the deposit, thereby increasing mine reserves and extending mine life.