3D Resources Limited (ASX:DDD) has completed an initial scoping study for its Adelong Gold Project in southern New South Wales, which it says demonstrates a viable project from mining both the Challenger and open-cut Currajong deposits comprised of 89% measured and indicated resources.

The study, which has generated production targets from mining ~40% of the project’s JORC resource, will now be used as a base to complete a full study with further drilling required to upgrade the project’s Caledonian inferred resources.

Speaking on the release of the study, 3D Resources Managing Director Peter Mitchell said: “The Initial Scoping Study for the Adelong Gold Project demonstrates an attractive commercial project based on mining only the existing measured and indicated resources which comprise only ~40% of the current JORC resources. This underpins the project but allows on-going exploration and evaluation work to fully define the excellent opportunities for establishing a bigger long term mining project. The Company expects to finalise the full Adelong Scoping Study once some of the inferred resources representing a further ~20% of the project resources are upgraded, which on the basis of some preliminary work completed to date, could add significantly to the viability of the entire project”.

The goal of the Adelong initial scoping study was to investigate the economics behind various development and processing options, establish a base viability for the project, and prepare a plan for continued exploration to upgrade inferred resources for inclusion in the full study.

The below financial analysis summary assumes a gold price @ $1,850 with an AUD/USD exchange rate of $A0.73 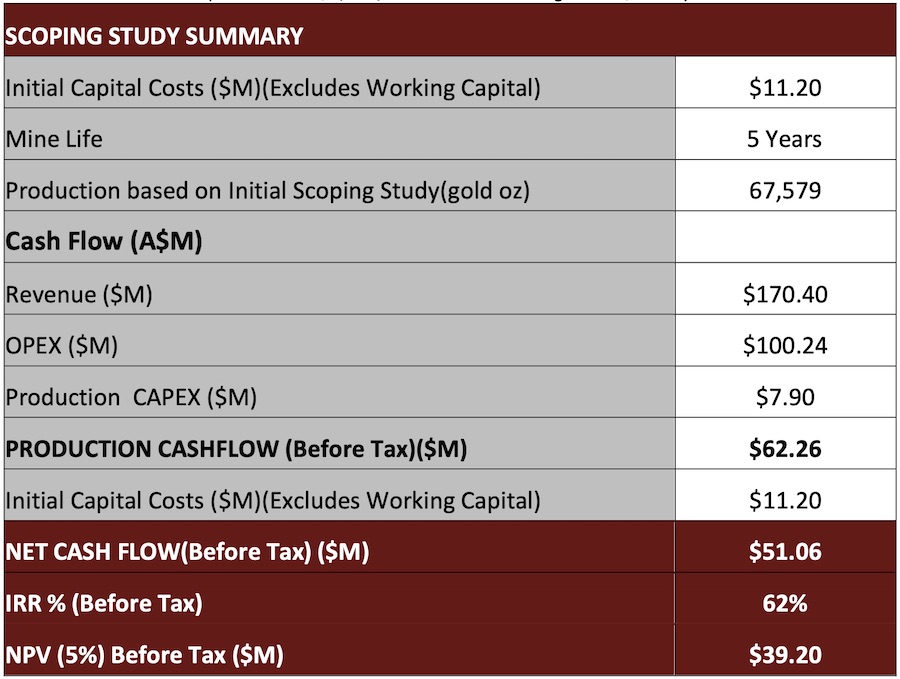 The company notes that variations in gold price, gold recovery rates and operating cost estimates may change the outcome of these forecasts.

3D Resources took control of the 70km² Adelong Goldfield in May 2020, which includes the Adelong Gold Project, until recently an operating mine, along with 17 freehold properties plus mining and processing plant equipment.

The company sees ‘substantial’ opportunity to improve the economics of the initial scoping study, with key areas of focus including an open-cut pit at the Caledonia Deposit, which could potentially recover 70% of the 30,000oz inferred resource, along with establishing a JORC resource for Mullock Dumps scattered around the project’s historic mines, which have been ‘extensively’ tested and are considered mineable reserves.