intersections up to 100m wide, extending discovery at depth and along strike

To date a total of 18 holes have been completed in this phase for 2,791m, testing a northwest-southeast trending, east dipping, mineralised zone across the boundary between sheared ultramafic/mafic rocks and a large felsic “porphyry” intrusion.

SRN said that the drilling has extended the mineralised zone both at depth and along strike of the previous intersections and remains open along strike and at depth. In addition, other parallel mineralised structures were intersected across a >200m wide corridor.

Surefire has now reported the results of 9 further RC holes at the Yidby Road Gold Prospect.

The new results included thick intersections with high-grade intervals from the central and southern part of the identified mineralised zone including YBRC035: 26m @ 2.02g/t Au from 126m incl 14m @ 3.01g/t Au & 2m @ 10.05g/t Au. This intersection is from one of three steeply dipping mineralised structures developed across a 200m wide corridor, that remains open at depth.

A step-out hole at the southern end of the currently identified deposit has also produced a significant and thick intersection YBRC037: 58m @ 0.83g/t Au from 28m incl 7m @ 2.07g/t Au & 10m @ 2.48g/t Au. This intersection is open at depth and potentially indicates that the deposit may also continue to the southwest and be thickening with depth.

The company said that the re-sampling of a 4m composite sample in YBRC017 included a 1m assay of 23.13 g/t Au and also resulted in the extension of the mineralised envelope in this hole to 100m @ 0.53 g/t Au from 96m.

All significant Intersections from Yidby Road program including previously released results are as shown below. 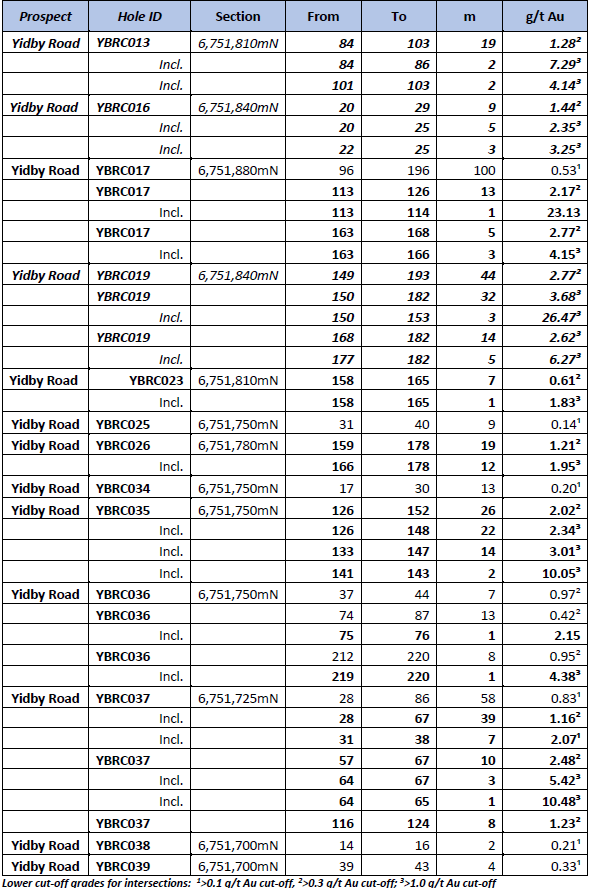 SRN said that following interpretation and modelling of the mineralised structures, further drilling will be planned to test the thickening, high-grade, down-plunge extensions of these lode structures, both to the northwest and southeast, in order to further extend the current discovery.

The company said that MMI soil sampling results as well as gravity and magnetics interpretation, indicated that the mineralised corridor extends at least another 400m to the northwest of the currently defined zone. SRN said that an additional PoW will be submitted shortly to allow the extension drilling to be planned with the objective of identifying further thick and gold mineralised structures within the Yidby Road corridor.

We have identified multiple mineralised structures across a >200m corridor and the deposit has only been drilled over a 200m strike length open to the north, south and at depth.”